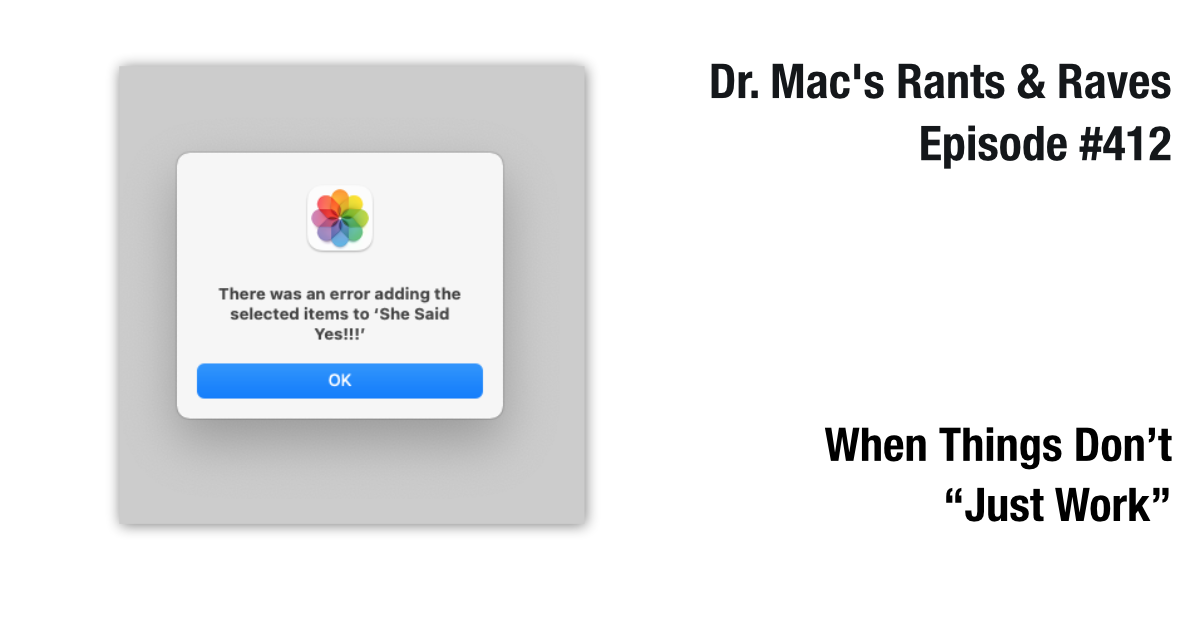 My son got engaged last weekend, so I wanted to create a shared photo album for attendees to upload (and download) photos. It’s something I’ve done dozens of times in Photos (and iPhoto before it), and it always just worked.

But this time it didn’t.

I created a shared album in Photos on my Mac as usual, but when I tried to add pictures to it, an alert informed me: “There was an error adding the selected items to the shared album ‘She Said Yes.’”

I tried a couple more times but kept getting the same alert. So, I deleted the album, created a new shared album, and tried to add some photos, which produced the same error message.

I decided there might be an issue with my local photo library file, so I tried to repair it by holding down the Command and Option keys while launching Photos. When the Repair Library window appeared, I clicked the Repair button. I knew from experience that repairing and rebuilding my Library, which contains nearly 70,000 photos and videos, would take some time, so I left it to churn overnight.

Meanwhile, I decided to try creating a shared album in the Photos app on my iPhone. But, when I attempted to add photos to it, I received an alert saying: “Unable to Share. There was an error while preparing to share. Please try again later.” 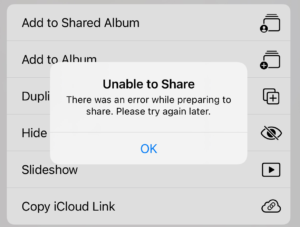 When I tried again later, after creating yet another new shared album, I saw a slightly different alert that said: “Unable to Post. There was an error while preparing to post. Please try again later.”

I thought perhaps the problem was with iCloud or Apple’s servers, but the Apple System Status page reported no issues.

Then Things Got Really Weird

When I returned to my Mac the next morning I discovered a new, more ominous alert: “The Photos App needs to quit because the photo library is being moved, is unavailable, or its data is corrupt.” 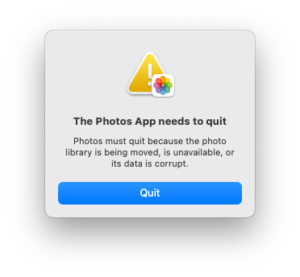 When I relaunched Photos, I got the bad news: “The Library could not be opened. Photos was unable to open the Library.”

Though I had backups of my library file, I decided it would be prudent to start from scratch. So I held down the Option key and launched Photos, which allowed me to create a new library file. I designated it as the System Photo Library (in the General pane of Photos’ preferences) and enabled Download Originals to this Mac and Shared Albums (in the iCloud pane of Photos’ preferences). Since I knew it would take a long time for Photos to slurp down nearly 70,000 photos from iCloud, I went off to bed.

When I checked my Mac in the morning, things got even weirder. Sadly, I’m out of space. Please tune in next week for the thrilling conclusion and the lessons I learned.