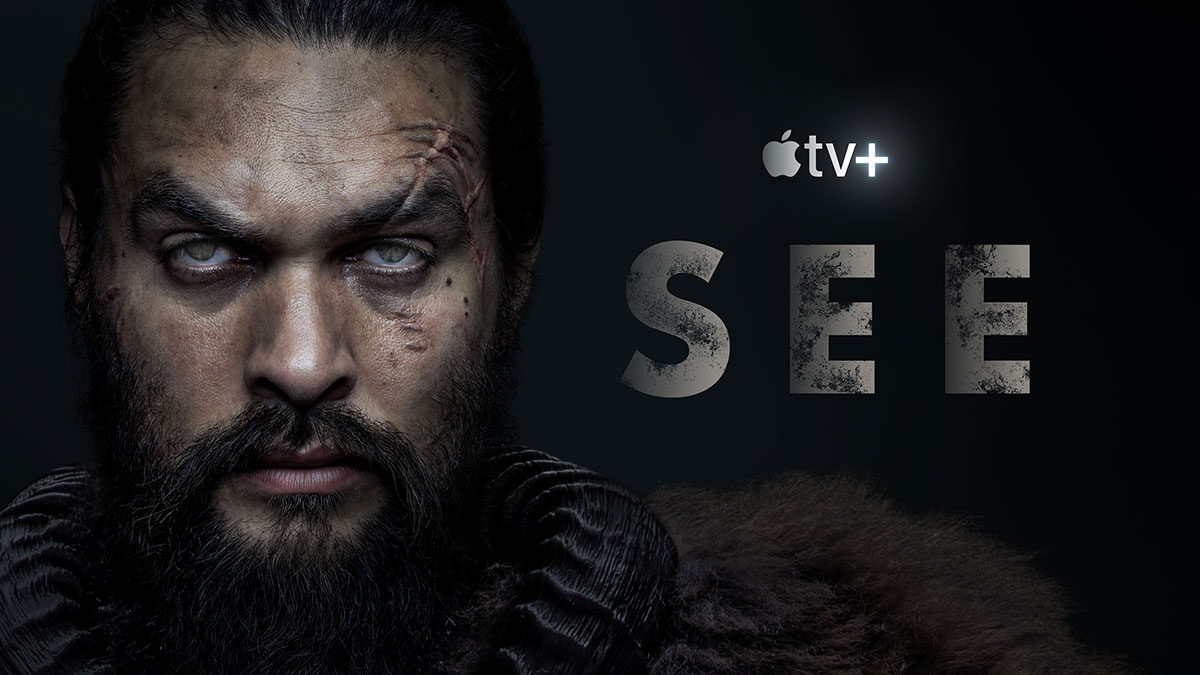 Apple TV+’s See has a lot going on for it on the surface.

All that is true, but those surface features are just the start. Beneath that surface is a show about people, relationships, politics, and a reality that challenges most of us to think differently.

Warning: I include some (quite) minor spoilers below.

It’s two or three hundred years in the future. Human society has been destroyed and a disease of some sort has left all surviving humans—and their progeny—blind. Humans in the local area See live a sightless, tribal existence.

The sole exception is a group of humans who have clung to an aging hydroelectric damn that still manages to crank out some amount of electricity. That electricity is seen as a gift from god, and the queen (Queen Kane) of this group is herself believed to be a god. The power that comes with the power to provide power and don’t get me started about how much I love that the queen listens to a record of Lou Reed’s Perfect Day—means Queen Kane’s city can support an army.

And that army is used to subjugate the local tribes. In the context of the show, a Witchfinder General has taken the bulk of that army out to search for two children.

And that’s where the instigating event enters the picture, because those two children can see. See? There’s background and world-building you should watch to truly appreciate, but the bottom line early in the series is that Queen Kane wants those children found (and probably killed) because vision is evil. Vision is what empowered humanity to almost destroy the world, and it must not be allowed to return. Humanity must be kept sightless as both an act of penance and to prevent evil from returning.

OK, yeah, plus the children’s father is Queen Kane’s jilted lover (who can also see), and the power of sight threatens her status quo. And the Queen is a lot bonkers.

Oh, and she speaks to god while having an orgasm, be it self-induced or with the help of a servant. Listen, I have to say right here that any worries I had about Apple offering us sanitized shows devoid of sex, violence, and profanity have been obliterated by the shows available at launch.

What first struck me about See was the world building. Before Apple offered us a behind-the-scenes look at the show, I was immediately enthralled with how the culture of Baba Voss (Jason Momoa, the hunky lead I mentioned) uses touch and sound to communicate, keep track of each other, and even how they move around in their village. I don’t know what it’s like to be blind, but there is a whole lot about this world that makes sense to me and is believable.

Highlights include the use of snapping to call someone’s attention, the use of non-English sounds to convey specific and precise meaning. This was brought to the forefront when the sighted children mentioned above vote with the same “chi-cha” sound used by their sightless fellow tribe members (episode 4). I also loved how sounds were used as warnings in combat and how chanting was used to maintain marching order.

Another little touch that stood out for me was how large numbers of people traveling utilized lead scouts with whips that they lightly flipped back and forth in order to feel out obstruction over as wide an area as possible.

People scar their faces to help identity themselves to fellow tribe members. People use bells and strands hanging from guide lines to know where they are. Everyone carries a staff or cane for tapping in front of them—and sometimes people fall from bridges or otherwise run askance of things sighted people take for granted.

Knot-tying is a form of written communication. This is one of the biggest stretches in that overly complex messages are communicated with a mere knot or three, but it’s an intriguing idea.

And the Shadows…what an amazing idea. And I hope we learn more about Shadows as the show unfolds.

And best yet, none of these things are explained in a stupid info dump. The world is presented as-is, and the actions, lives of the characters, and the world itself are all allowed to speak for themselves. The show runners trust the audience to cotton on to what is happening, and that really works for me.

I’ve also enjoyed watching the (rather violent) combat. The show has seemingly put much thought into how a sightless world of humans would fight, and the combat system they develop works for me. Jason Momoa, in particular, is amazing, and the things he does as the sightless Baba Voss are simply different from any combat I’ve seen ever before. The weapons are subtly (and not-so-subtly) different, the moves are different, the strikes and swings are different. It’s all just fascinating.

One friend of mine honed in on how Queen Kane wears a crown in one of See‘s trailers. I’m invested in the show and have a quick response: people cling to vestiges of power from the past. Take a look at Czars, Tzars, and Tsars almost two thousand years after Augustus Cæsar himself took his uncle Julius’s last name to glom onto his legacy for an example of this. It’s easy to see this culture clinging to a crown no one can see out of tradition.

On the other hand, I got cranky in the 2nd or 3rd episode when Baba Voss’s tribe ran into issues with inbreeding and genetic defects 12 years into living an isolated existence. That would require generations, not a dozen years, thank you very much.

And still others have whined about the entire premise of the show.

Whatever. If you don’t like it, more power to you, but this show gets almost everything right, and it does so in compelling and interesting ways.

See, a Show about People

And that’s probably because See is first and foremost a show about people. The setting is the vehicle for the story, not the point of the story. I’ve been thinking back on Joss Whedon talking about how Buffy the Vampire Slayer was a show about people and relationships, about friendships. Buffy is set in a world of vampires and hellmouths, but it’s immaterial to what the show was about,. and that is the big secret that makes Joss Whedon such a great story teller. His shows are never about the world they are in, and are always about the people who live in that world.

What makes See so great is that the world I described in glowing terms quickly recedes into the background. By he 4th or 5th episode, while there were a couple of things that stood out for me and made me go, “Huh, yeah, that’s cool,” I wasn’t thinking about the world. I took it for granted, which is quite the trick for a show with such a fantastical premise.

5 thoughts on “Apple TV+: ‘See’ Is a Great Show that Transcends Its Captivating Premise”