Here are some ideas I have to improve iBooks in iOS 11, because I want to see it succeed. As an avid reader, I was disappointed that there was nary a mention of iBooks at WWDC 2017. I’m not just talking about the app, I’m referring to Apple’s eBook ecosystem as a whole. I think improvements can be made in both areas, and that Apple could give iBooks a bigger presence in physical Apple stores.

When it comes to books—or any type of content—the two most important features for people are discovery and sharing. The App Store is getting a major redesign in iOS 11, one designed to make it easier to discover new apps and games. I’d love to see Apple bring the same attention to iBooks. A new UI could feature eBooks and audiobooks in new ways and make it easier for readers to figure out what to read next.

Another change coming to iOS 11 is the camera. We saw how the iPhone camera will be able to scan QR codes and Wi-Fi router codes. When it comes to iBooks in iOS 11, I want to be able to scan a book’s barcode/ISBN number and be taken to the iBooks version. 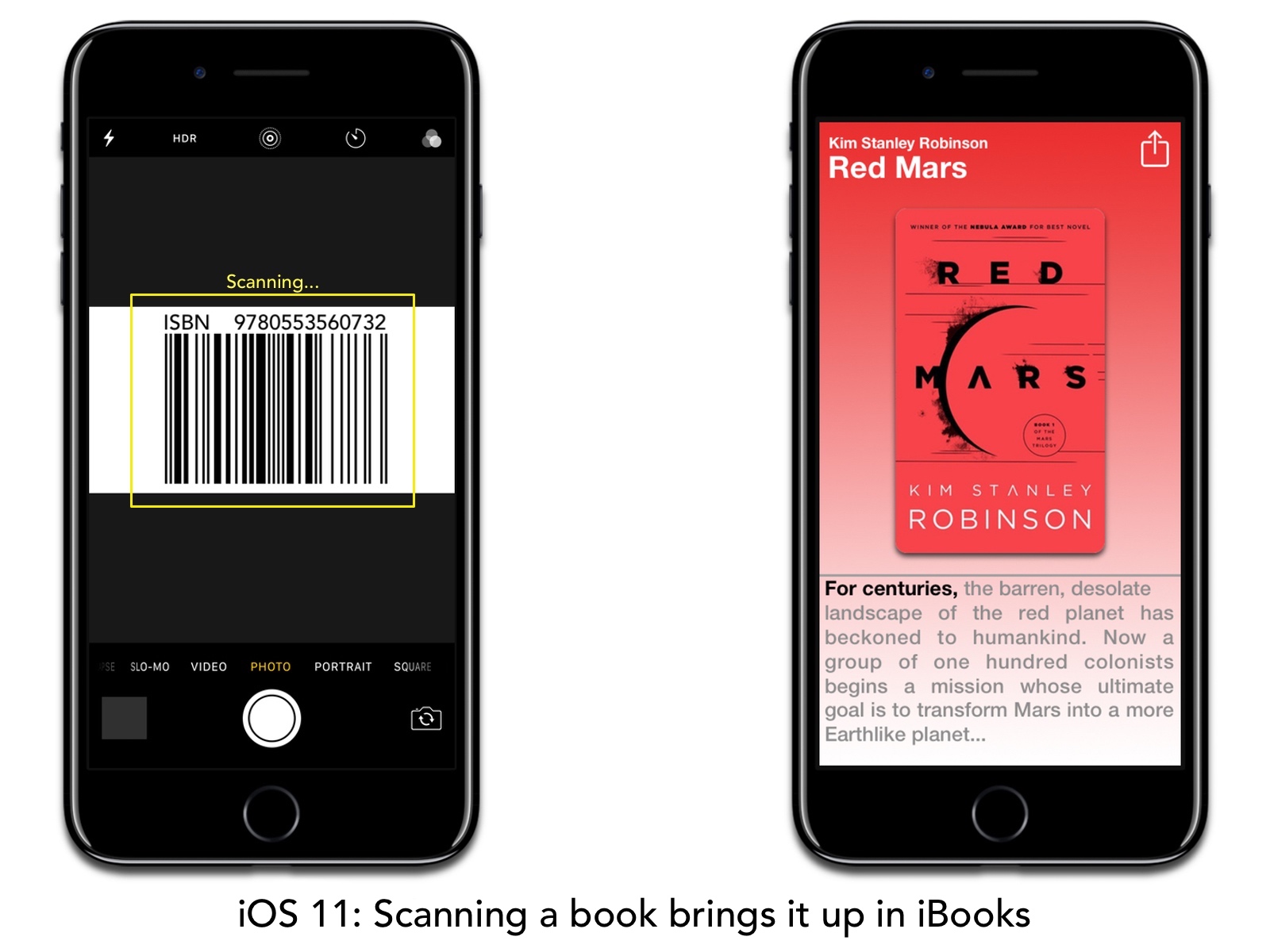 Some will disagree, but Apple could take another cue from both Amazon and Apple Music by offering monthly iBooks subscriptions. I know next to nothing about the publishing industry, so I don’t know if a monthly subscription like this would benefit authors or not. But it’s worth thinking about, and Amazon already does it with Kindle Unlimited.

iBooks should also have better recommendations. I know people consume books and music differently, but I’d like to see a weekly or monthly For You book playlist (or “readlist”) that suggests books I might like to read next. Shareable readlists would also be terrific. It could help harness the power of friend-to-friend recommendations that has long driven book sales, just as much as it has helped music.

Currently, iBooks has a “More Books You Might Like” section under the Featured tab, but the suggestions are awful and I almost never browse through them. Using machine learning, Apple could scan my iBooks purchases and recommend books based on genre, popularity or other factors. Apple may already be doing this—or something like it—but recommendations on iBooks needs to improve.

These are just a few features I think could improve iBooks in iOS 11 and beyond across iPhone, iPad and Mac. This is just part one. In part two, The Mac Observer’s editor-in-chief Bryan Chaffin will explore how Apple could showcase iBooks in Apple Stores. If you’re a reader hoping to see some changes to iBooks, comment below and tell me your thoughts.

Having self-published both on Amazon and iBooks, I can say that publishing on iBooks is not particularly harder than Kindle. The bigger problem is that the marketplace (at least for self-published books) is much, much larger on Amazon. I published a little book of cartoons (MacToons, about the Macintosh) and put it up for free on both sites. Every day I get at least one or two downloads from the Kindle store. I get absolutely zip from iBooks, despite the fact that it’s a book about Apple stuff. On top of that, Amazon has all sorts of paid marketing options,… Read more »

The real power of iBooks for me is the ability to save any web page as a PDF and stuff it into iBooks into categories that the user can define. Th iOS version of iBooks allows naming those saved docs to anything you want. The Mac version of iBooks doesn’t allow you to save the names you want; it used some coded title (for many web pages it’s jinnerish). When you sync the iOS iBooks to the Mac iBooks, it defaults to the jinnerish and over writes the titles you saved on your iOS device. I’ve had to rename 100s… Read more »

Better PDF management is another gripe I have. For example, it’s annoying that there are only two sharing options for PDFs: printing and email. Why PDFs can’t access iOS’s share sheet is beyond me.

Andrew, great article. My company hosts the annual iBooks Author Conference, and trust me, the iBA user community has clamored for some of these changes, and more, for years. This year, the conference is October 12-13 (and once again in Nashville) with NASA as the keynote, and Southwest Airlines (which uses iBooks Author all over the company) as a major sponsor. And yet, some in Apple would gladly tell you no one cares about iBooks Author, which is ignorant. Two years ago next week (during the major “ISTE” educational conference) Apple rolled out a transformative iBooks Author update, version 2.3,… Read more »

I’ve never personally used the iBooks Author app, but the consensus among many users is that it produces gorgeous books, but is difficult to use.

I have used it for my recipies and for my haikus, yes it is not the easiest app to use. Bring back HyperCard.

The old HyperCard software, was the missing link, to much of the web today.