Apple had two major changes in iPhone 7 beyond incremental improvements. The first is the much-talked about lack of an auxiliary port for headphones, but the other will effect the way we do things far longer than the transition to Lightning audio. That’s moving from a physical Home Button to a touch-sensitive, stationary Home Button. Here’s what I thought about the iPhone 7 Home Button during my hands-on session at Apple’s media event. 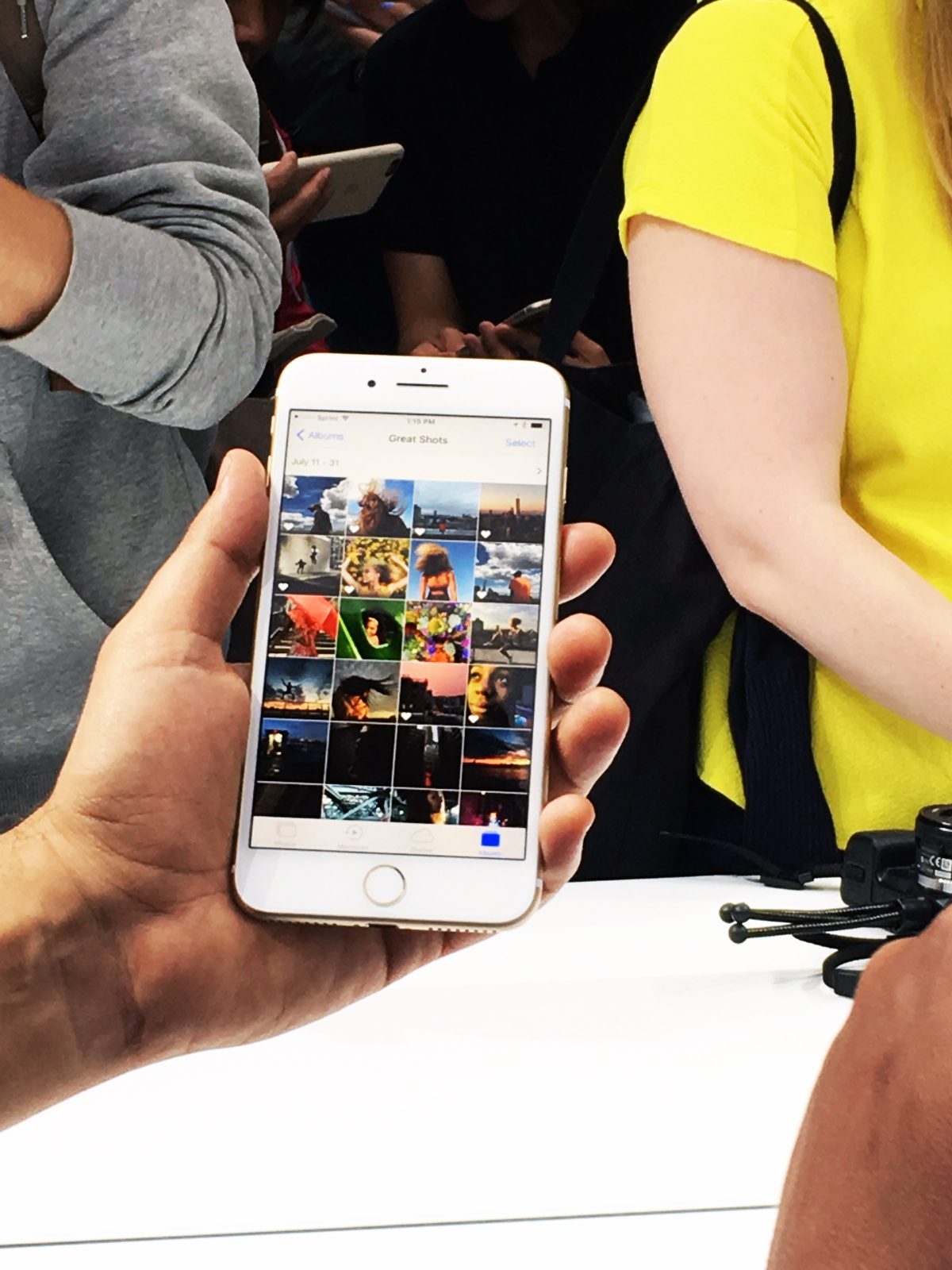 iPhone 7 Plus at Apple Media Event

Three Changes in One

We are actually getting three changes in one with the new Home Button on iPhone 7. The first is the above-mentioned transition from physical button that moves to a touch-sensitive pad. Apple is using its fantastic Taptic Engine to make it feel like the button is moving, even though it isn’t.

In my very limited testing, This element fell short of my expectations. The feedback you get makes it clear that a press has been registered, but it didn’t feel like the button was moving. When compared to the amazing Taptic Engine feedback in Apple Watch, Apple’s new trackpads, and 3D Touch on iPhone 6s, it was disappointing.

On those other devices, the haptic feedback utterly fools me. On iPhone 7’s Home Button, it did not feel like the button was being pressed. At this point I’ll iterate that my testing was brief, in a crowded and noisy room, and cursory.

The second change we’re getting with this new Home Button is that it measures velocity. This could be very, very cool because it means not all presses are created equal. Out of the box, iPhone 7 and iPhone 7 Plus allow you to call up Reachability with two light presses. This is similar to how older iPhones with Touch ID work, as noted in the comments below, but the ability to measure force could be harnessed in novel ways.

I don’t know what this ability will bring, but the potential inherent in this technology makes the above-mentioned disappointment easy to live with.

The last major change that comes with iPhone 7’s new home button is part of iOS 10 itself: the move from swipe-to-unlock to press-to-unlock. I’ve been using iOS 10 betas for a month. So far, I’ve found the press-to-unlock transition less-than-satisfying.

My main problem comes when using the Home Button on my iPhone 6s to wake up my iPhone to look at Lock Screen Notifications. Because TouchID 2 is so fast, more often than not I unlock my iPhone instead of merely waking up the display. It’s annoying, but I’ve assumed I’m just being slow to adjust.

This feature is going to play out differently on the new Home Button on iPhone 7, where I suspect it will work far better. Much testing remains to be done on this front.

Home is Where the Heart Is

My hands-on writeup seems to focus on the negative, but I’m actually quite happy with this change. For one thing, I suspect Apple will tweak Taptic Engine use until it feels right. If that happens, the new Home Button will feel as magical as the other Force Touch/3D Touch uses feel.

For another, I’m interested to see what comes out of the force sensitivity feature in the new Home Button. It could increase functionality in this button, especially as more of Apple’s iOS product line adopts this technology.

The last factor is that ditching a physical button not only removes a mechanical feature that can break, it’s part of Apple’s IP67-rated water-protection. I’ve lost an iPhone to water before. It sucks. It’s frustrating. That isn’t likely to happen again, and I say giddy-up!

That’s not only good for my devices, it means fewer people needing Genius Bar appointments for broken Home Buttons and water damage. That’s fewer people between me and the Geniuses when I do need help. Again, giddy-up!

All in all, I think the new buttonless Home Button is a winner, despite my disappointment with the pre-release haptic feedback.

Honestly… I put off getting the iPhone 7 because of the whole headphone jack/home button change. I finally had to give in and upgrade my phone. Now that I have it (256 Rose Gold), I’m annoyed that the vibrations are almost imperceptible. When I get a notification, I don’t know about it until I actually look at my phone. In addition, the home button, still can’t tell the difference between 1, 2 and 3 haptic settings. The headphone jack… yes the little adapter is included but what if you lose it or forget it it’s attached to another pair of… Read more »

You bring up a solid point about TouchID being so fast that it negates the new Notification Features in iOS10. Here’s a fix. Use the “Raise to Wake” feature to wake your phone up instead of using the Home Button.

Looking forward to getting my iPhone7 this Friday (ordered the matte black so I can pick it up in store). Jumping from a 5s up to 7, so this will be my first encounter with lift-to-wake, force press and taptic feedback.

Bryan — seems like there are some great comments and suggestions on how to navigate the lock screen, notifications, home button, etc. Perhaps another write-up by you or Melissa to distill the best workflows after the iPhone7 is delivered to the public?

As I thought about this more and used my iPad Air 2 with my Smart Cover, the raise to wake plus the rest to unlock should keep us all from blowing through notifications. I don’t have a phone with the fast sensor or raise to wake but I will soon. 😉

My main problem comes when using the Home Button on my iPhone 6s to wake up my iPhone to look at Lock Screen Notifications. Because TouchID 2 is so fast, more often than not I unlock my iPhone instead of merely waking up the display. It’s annoying, but I’ve assumed I’m just being slow to adjust. I can’t believe nobody thought of this. I use my ring fingerprint to unlock. Then if I just want to see the lock screen notifications I use my index or thumb. The added advantage of this is my ring finger gets used, and cut,… Read more »

darrealism, that’s a good point. I clarified the text to put in proper context. I don’t yet have specific examples of how this feature will be harnessed, but I’m excited about its potential.

Thanks for dropping a note!

Out of the box, iPhone 7 and iPhone 7 Plus allow you to call up Reachability with two light presses. Two hard presses works like two old Home Button presses, i.e. it brings up your running apps.

I’d be curious for another example of the versatility, because this sounds exactly like how it works on the 6s Plus.

Does anyone have a better experience? Yes, I have a non-clunky solution. In iOS 10, the screen turns on just by raising the phone. Even if you’re holding your thumb on the home button (not “clicking” it) it will unlock the phone but the lock screen won’t dismiss so you can read your notifications or use handoff or open the camera, until you actually click the home button, then the lock screen will dismiss. It sounds weird to explain, but in practice it’s very easy. Pick up your phone (no need to hit the power button) to turn it on… Read more »

webjpgrm: “if you want to swipe up to use the continuity feature … anyone have a better experience?”

Yes. Just start with the power button, not “home”.

It’s clunky, I know. But that’s the solution. It also solves my “lock screen notification” issue. Did I mention – it’s clunky?

Re: Third Change. I too have been very frustrated on various occasions when waking up my phone and having the lock-screen messages disappear.

Many of them are in “Notifications” – but not all. And that is a problem, at least it is for me.

The change I’d like to see is a screen-swipe that would show you everything that was on the just-opened lock-screen. No exceptions. That would be great.

I have some psychological impediment when trying to use Force Touch where I never know how much I have to push. It seems with a physical button I can get a better feel for when I have tapped the button versus actually depressed it. So I don’t use Force Touch at all and I’m afraid the new home button would give me the same feeling. Given that, how could you get any more versatility? There doesn’t seem to be wiggle room for an intermediate level of touch-force between a tap and a press. Also, related to the hold-to-unlock that we… Read more »