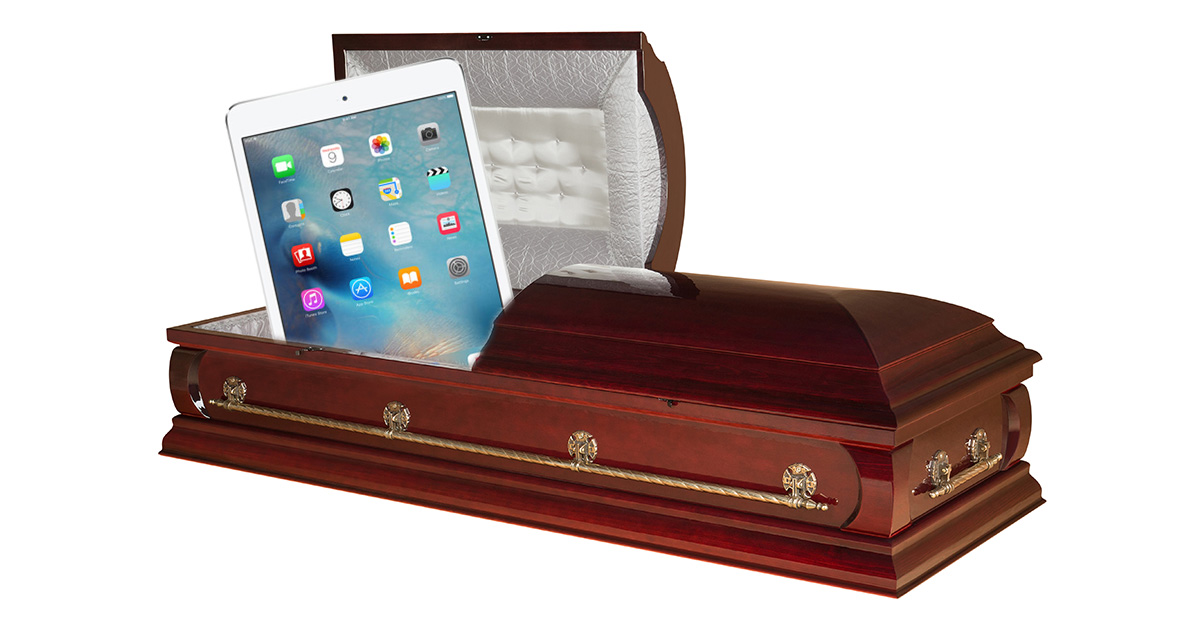 A long time ago in this galaxy, Steve Jobs thought the 7-inch class iPad would be a bad idea. There wouldn’t be enough room to create great apps, he said. The rest of the tablet market jumped in anyway, and Apple just had to follow. Think education. But Mr. Jobs was right. The 7.9-inch experience wasn’t that great for anything but iOS. Phablets arrived. And so, I am expecting the eventual demise of Apple’s iPad mini.

There are trends in the consumer technology world that affect Apple whether or not the company thinks they fit in with a strategic vision. For example, if Apple thought the 7.9 inch iPad were a good idea and it has been selling well, we’d expect to see an iPad mini 5 soon. All things being equal.

However, there are issues that interfere with that grand plan. For that, I need to digress.

Remember when, in 2010, Steve Jobs declared that a 7=inch iPad would be a bad idea? Then two years later, Apple launched the iPad mini with a 7.9-inch display. As a refresher, here’s the backstory about the negative feelings by Mr. Jobs and the mini launch and how Apple’s Eddy Cue talked changed Mr. Jobs mind.

My feeling at the time was that Apple’s competitors saw an opening. A smaller, less expensive tablet would be a great way to steal market share from Apple’s larger, much more expensive iPad. It worked. For awhile.

Demise of the iPad mini Begins

Two things probably weighed against the smaller iPads from Apple’s competitors. First, Apple’s brilliance, planning and excellent software engineering made iOS work on an 7.9-inch display. Not so much on competing products. Second, the rise of the phablet worked against the very market the 7-inch tablet was supposed to exploit. In other words, when you’re targeting a market where customers have limited funds, don’t expect them to buy both a large smartphone and a small tablet.

One thing that worked against the iPad mini was its difficulty penetrating the education market. Just before it was released in 2012, most observers believed that it would have to sell in the US$200-$225 range to make serious inroads in secondary education. Apple’s launch price of $329 made that impossible.

By and by, as a result, I think the world’s production capacity for the 7.9-inch display dwindled. I can’t prove this, yet, but it’s my strong suspicion. The result of that is that even if many Apple customers love the iPad mini, it’s getting harder and harder for Apple to sell them at a tidy profit.

This goes a long way towards explaining why the iPad mini 4 didn’t see a price decrease on March 21. By conflating a storage increase to 128 GB with its higher than desired OEM costs for the 7.9-inch panel, Apple keeps demand under control. It defers a decision about discontinuing a popular product and entices customers to move to a product with much greater panel (9.7-inch) availability.

In addition, when the iPad mini launched in October 2012, it weighed 0.68 pounds, a small fraction of its bigger brother at 1.46 pounds. That was a big factor in the mini’s favor for many customers. The iPad announced on March 21 with a 9.7-inch display weighs 1.03 pounds. The difference isn’t nearly so great these days.

With Apple offering iPhones at 5.5-inches now and perhaps even larger in the fall, the size advantage of the iPad mini also goes away in a market where customers are hard pressed to have a MacBook/Pro, an iPhone, an iPad Pro … and a iPad mini as well.

All of this is just my surmise, but I think it tells the story of how it’s not always possible, given changes in the marketplace, production focus, and changing consumer product mixes to continue selling a popular product whose time has passed.

I’ve been waiting for the iPad Mini Pro. The minis are perfect for carrying in my purse. I can access all work without carrying around a laptop. The regular sized iPads are too big & heavy for purses. Now they even want a larger iPad that will only compete with a laptop. Not everyone is going to buy a larger iPhone. In fact most won’t as the the 7 plus is pretty large for most people. A larger iPhone is not a substitute for the iPad mini. There’s no way they don’t make money off the mini. Since all iPad… Read more »

My wife loves her Mini 2 but I have not used a iPad of any kind since the original iPad which I grew tired of in a year. I think the smaller device has been crowded out with the advent of bigger smartphone screens. In fact tablets in general have suffered from this, and its probably why the iPad Pro has not done that well and why Apple went back to basic iPad 101 with the new iPad. Provide a reasonably priced full tablet for a second device, or even a primary that complements a iPhone owner. The tablet is… Read more »

Mini is the perfect form factor for a portable yet still highly usable device. I can take handwritten or typed meeting notes, edit presentations and spreadsheets, hold web conferencing meetings, all on a tablet that easily fits in my computer bag, and is just a tad larger than a typical small spiral bound notepad – so easy to quickly grab on my way to a meeting. A phablet would be too small for most of these tasks, and a full size tablet like Air would be a bit too large. It’s a pity if Apple decided to kill a 7″… Read more »

With three different sizes it’s not too different from the laptop lineup. With that said however I’d love Apple to build an iPad like the tablets on WestWorld

I never planned on buying a mini (too small for my day-day needs). But, it turns out to be the mini is perfectly sized for in-car use. Mounted on the dashboard it is perfect for navigation and entertainment and having the cellular connection means always a data connection. The 9.7″ is just too big (I tried) to find a place that does not block something. The mini just works and provides instant car-play without having to car manufacture to support it. 🙂

I do have an iPad mini 4, but once I got an iPad Pro 12.9″ I hardly ever use it anymore. I think the main failure for the iPad mini actually resides in the failure of the iBooks. At roughly the same size as Amazon’s Kindle, the iPad mini should have been a mainstay for book lovers. Where the iPad 9.7 inch excels at webpages and movies, the iPad mini should have been a great book and magazine device. But the iPad’s glossy glass screen, okay battery life, and near uselessness outdoors made the Kindle king of digital books. The… Read more »

My wife still has a mini 2 from years ago. She went to it from her 9.7 in iPad for the same reason as RickF mentions. Its easier to carry in her purse and meets her eBook-fanatic needs perfectly. I on the other hand have struggled with the limitations of IOS on an iPad. I tried the 12.9 Pro for a while. It was also easier on my old eyes, but it also is limited by IOS. Two-tasking?? Give me a break…not good enough. Tried hard for a long time to work around the awkwardness of IOS and love the… Read more »

My first proper iPad was the 1st Gen, and while I loved it, I found it was a bit on the large size for easy portability, and the 1st Gen kept up with most of what I wanted to do) But eventually as it got left behind by iOS updates, it got used less for web surfing. I still happily used it for iBooks and other less processor intensive stuff. I would look at the new iPad releases, and ponder if I should upgrade, but I couldn’t justify the prices…. (Sorry Apple, but you’re not cheap) When Apple released the… Read more »

In my case i have an Air. It does most of what I want. But when I replace it, probably not for another year or two, it will most likely be with a Pro. Probably the 12″. So the Mini, while interesting, never grabbed my attention. I use every inch of the Air and I sure as heck don’t want to go smaller.

We are an electronic duo family for different reasons. As soon as the iPad mini arrived my wife went to it immediately. It was easily held, fit into mosy of her purses, and was the size of the multitude of paperbacks she reads continually. She loves it and nothing in the bigger iPads is of interest. It and the laptop Pro serve her needs along with a basic iPhone 6. I on the other hand use the iPad 9.7″ for 2/3 of my needs along with an iMac 27 and an iPhone 6s+. However, the iPhone 6s+ is beginning to… Read more »

The mini form factor is the perfect size for holding, reading from as a book, and carrying around.

Turns out two of my colleagues (who it turns out are also iPad mini users) voiced the same opinion after seeing today’s new products. But none of us have or want supersize iPhone Plus, either.

When they release iPad mini Pro I’ll buy one straight away.

John: I suspect that you are correct. In my household, no one ever wanted the iPad Mini, although at one point my wife considered it, as it would fit in her purse, but then dismissed it. My son once described the iPad Mini as Apple’s most useless product, but loves his 9.7″ iPad Air. @brilor: Not every product will fit with everyone’s work/play habits and needs. For me, the iPad Pro (9.7″) has become my must-have, go-to tool for a large fraction of my daily work; especially for meetings (like this morning in a colleague’s office) and conference calls where… Read more »

With only an adult household our situation is probably different from many. However, for the things we can’t/won’t do on our smartphone, we use a desktop Mac and don’t need/want a tablet. Also, I suspect many simply don’t need( or found their usage matches that described above ) a tablet upgrade. Apple’s extensive and confusing tablet lineup isn’t helping; possibly small, medium and large are sufficient assuming Apple pursues iPads.