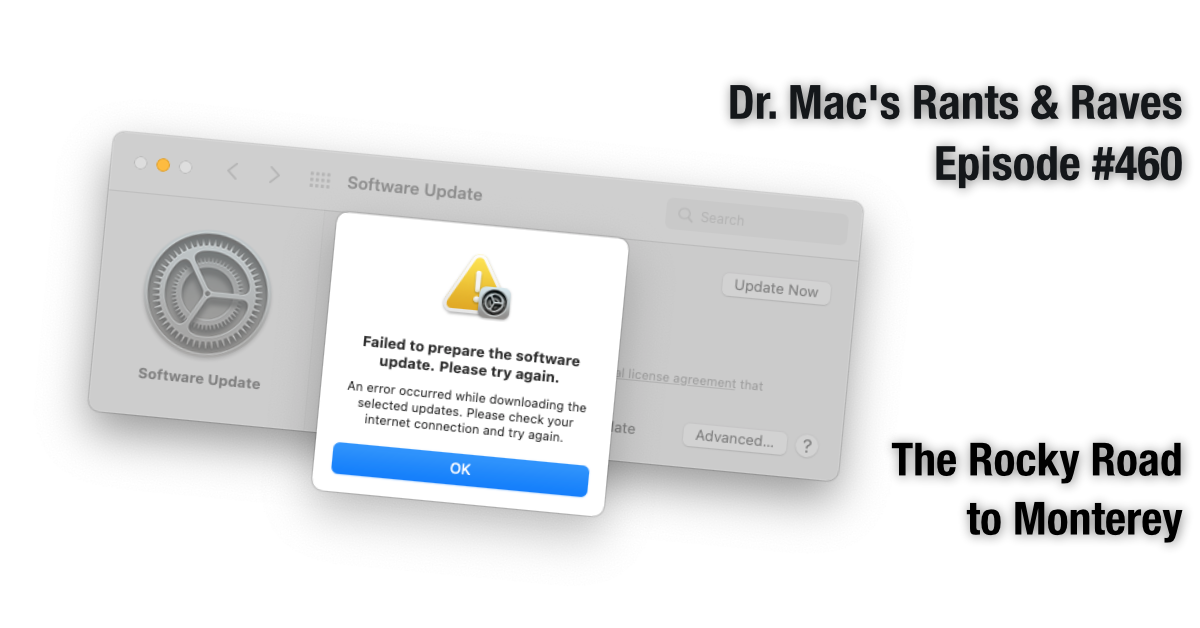 It started with the upgrade itself, which began without incident but failed after nearly an hour with this message: “Failed to prepare the software update. An error occurred while downloading the selected updates. Please check your internet connection and try again.” 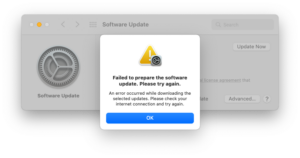 I checked my internet connection (which was fine) and tried again, but it failed again with the same error message.

I performed a Safe Boot and ran Disk Utility’s First Aid on my startup disk, just in case. The third time was the charm, and my upgrade finished without incident after about an hour. Then, things got weird.

Apps including System Preferences, the Finder, Safari, Messages, and others began to quit unexpectedly. 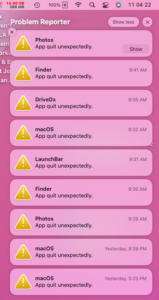 It happened so often I began to expect them to quit unexpectedly.

After a few days, this issue has calmed down somewhat, but it is still happening more often than it ever did under Big Sur.

Photos Had a Hissy Fit

The first time I tried to use Photos, I got an error message: “The library could not be opened. Photos was unable to open the library Full Library 2021 (-1).” 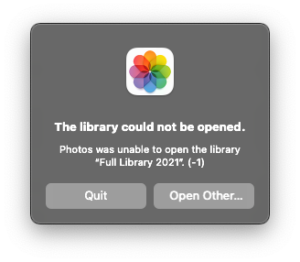 So, I tried (and kept trying) to restore or repair my Photos library, but my Mac kept restarting “because of a problem” without completing the restoration or repair. 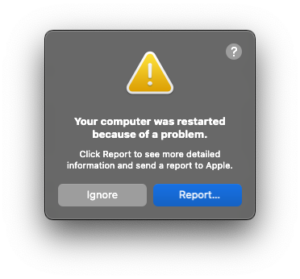 After a couple of days, it completed its repairs successfully, and Photos seems to be working correctly (after countless hours of troubleshooting).

Ghosts in the Machine

Then there was the matter of my messed-up desktop. I have dozens of icons on my desktop, arranged just the way I like them. But, after I upgraded to Monterey, the icons refused to stay put. When I wake up my Mac, as often as not, my desktop icons have rearranged themselves spontaneously, leaving a jumble of overlapping icons in place of my carefully arranged groups

I still haven’t figured out how to fix this haunted desktop, and it’s annoying the heck out of me.

Another issue I haven’t yet resolved is that my wired keyboard has become unreliable since the upgrade. Characters don’t appear when I type them, sometimes appearing after a long lag and sometimes not appearing at all. It happens with two different wired keyboards and is so irritating that I’m using the built-in MacBook Air keyboard, which I hate.

Finally, there have been reports of Macs becoming unresponsive (bricked) after the Monterey upgrade (Google it).

And so, gentle reader, I once again recommend you not install Monterey just yet. As I’ve suggested in the past, wait for a bug-fix release (or two) before considering the upgrade to MacOS Monterey.

2 thoughts on “The Rocky Road to Monterey”