Critics of Apple say that Siri could be much smarter than it is, and Apple’s stance on privacy is holding the technology back. But Apple doesn’t agree, and explains that Siri is just as effective in its current state, and reminds us that the voice assistant we’re familiar with is just the tip of the iceberg (via FastCompany). Here’s how smart Siri and private Siri can be the same.

The companies in Silicon Valley that have a smart digital assistant are achieving this by utilizing machine learning on their servers in “the cloud”. Some computing is done on the front end, like basic voice recognition. But for the most part, these assistants are a mouthpiece for cloud computing.

Siri works differently because the majority of the machine learning happens locally. Some data is sent to Apple’s servers, but they are anonymized with technology like differential privacy. Apple’s Greg Joswiak, vice president of product marketing, shared Apple’s thoughts behind Siri:

We’re able to deliver a very personalized experience . . . without treating you as a product that keeps your information and sells it to the highest bidder. That’s just not the way we operate…It’s true that we like to keep the data as optimized as possible, that’s certainly something that I think a lot of users have come to expect, and they know that we’re treating their privacy maybe different than some others are.

When you ask Siri something, your iPhone removes the query of any trace of your User ID and assigns a random request ID to it. The device encrypts and sends it to Apple’s servers for more advanced computing than your iPhone can handle. The servers send the query back with the relevant information. Only once the data is back on your device does it get decrypted and associated with your ID again. 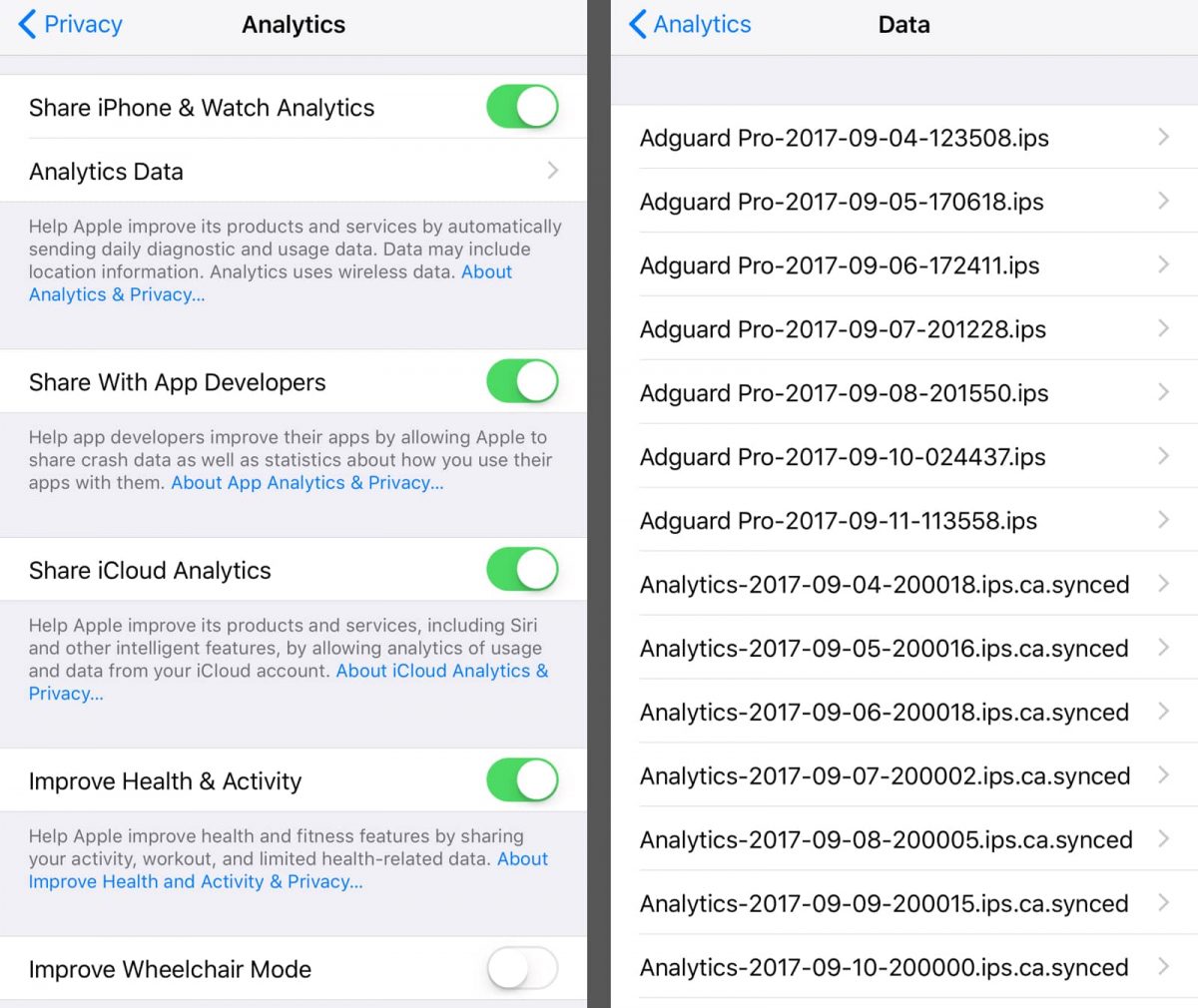 iCloud Analytics in your device settings.

Not Just a Voice Assistant

Siri isn’t just a voice assistant either. Much of your iDevices’ smarts is thanks to Siri’s machine learning technology. Whether it’s predicting what emoji you want next, suggesting news topics, and retrieving contacts and calendar information from email, this is all done by private Siri working behind the scenes. Craig Federighi, senior vice president of software engineering:

Siri is no longer just a voice assistant…Siri on-device intelligence is streamlining everyday interactions with our devices. With the software update coming this fall, users will experience even more Siri functionality, and in the years to come it will be ever more integral to the core user experience on all of our platforms.

Apple does train its machine learning models on user data on its servers, like voice recordings. But this information is completely anonymous. In the case of audio clips Apple only keeps the data on its servers for six months at a time. This helps improve Siri’s natural language processing and voice recognition.

You can choose whether to participate in machine learning analytics. On your iPhone or iPad, you can go to Settings > Privacy > Analytics. You can opt in or opt out to sharing analytics data with Apple at will. It presents a long list of everything that sent to Apple. Siri is going to get smarter in iOS 11, and you can find out more by tuning into the special event tomorrow.