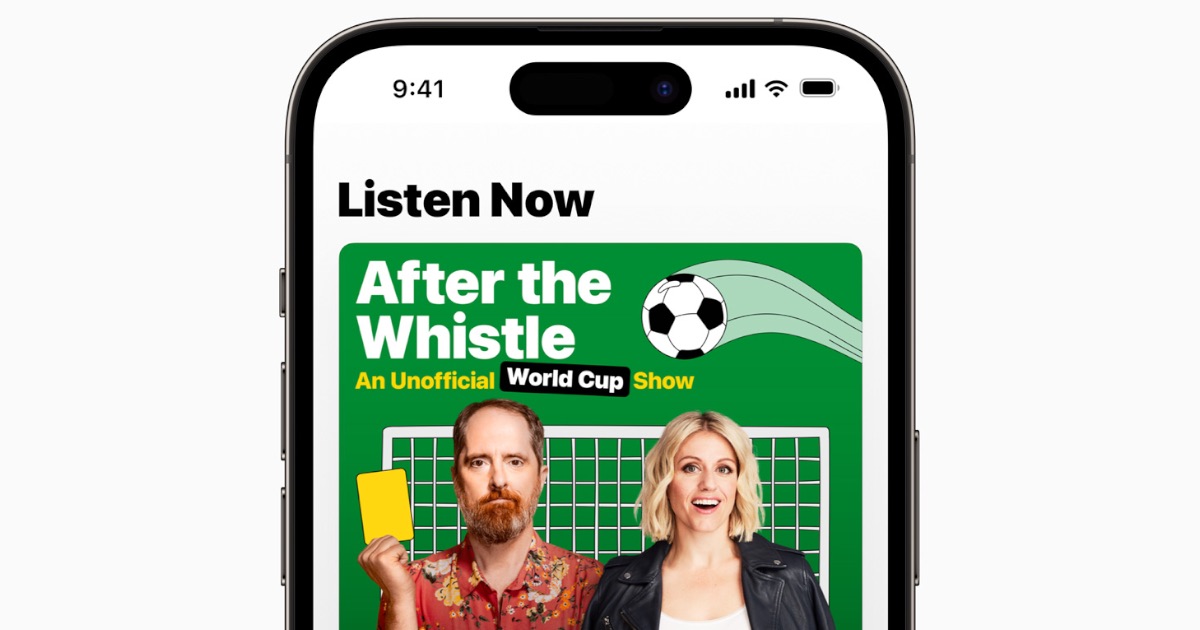 Today, Apple is introducing the new podcast After the Whistle, featuring Brendan Hunt of Ted Lasso fame and Rebecca Lowe of NBC Sports.

The new limited series from Apple will follow the World Cup tournament. The first episode is currently available for streaming.

Apple Introduces ‘After the Whistle with Brendan Hunt and Rebecca Lowe’

Apple is unveiling the new limited series podcast After the Whistle with Brendan Hunt and Rebecca Lowe, which features Hunt from Ted Lasso, as well as Lowe of NBC Sports. The new series premieres Nov. 17, 2022, just before the official World Cup begins Nov. 20.

The new podcast will be available to U.S. users through Apple News, whereas listeners in 103 countries and regions will be able to play the series through Apple Podcasts. Furthermore, new episodes will premiere “multiple times per week following momentous games”. Throughout the series, both Hunt and Lowe will take a look at exciting plays, explore key moments, wins and upsets, off-field antics and more.

“Apple loves soccer — from Ted Lasso to Major League Soccer, and now two of the game’s most exciting voices delivering listeners their take on all of the biggest moments of the tournament”, said Eddy Cue, Apple’s senior vice president of Services. “We’re proud to offer our users around the world great ways to follow all the excitement with /After the Whistle/ and in Apple News”.

Interestingly, the press release also mentions that in addition to playing Coach Beard on Ted Lasso, Hunt is also a major soccer fan in real life, following both MLS and the English Premiere League. Additionally, Lowe is a soccer host in the U.S. and U.K. with over 20 years of experience, and currently is in her 10th season of covering the Premier League for NBC Sports.

Furthermore, the two have also crafted their own “Listen With” collection, featuring their favorite podcasts. Users can find this collection here.

After the Whistle with Brendan Hunt and Rebecca Lowe is available on both Apple News and Apple Podcasts. Currently, the first episode is now streaming.

With Apple now having an agreement to stream MLS exclusively for 10 years, it won’t be long until we’re covering MLS on Apple TV+. Additionally, fans can also find news about their teams through Apple News.

Of course, many are still eagerly waiting for the third (and final) season of Ted Lasso.

Do you plan on listening to After the Whistle? Let us know in the comments.