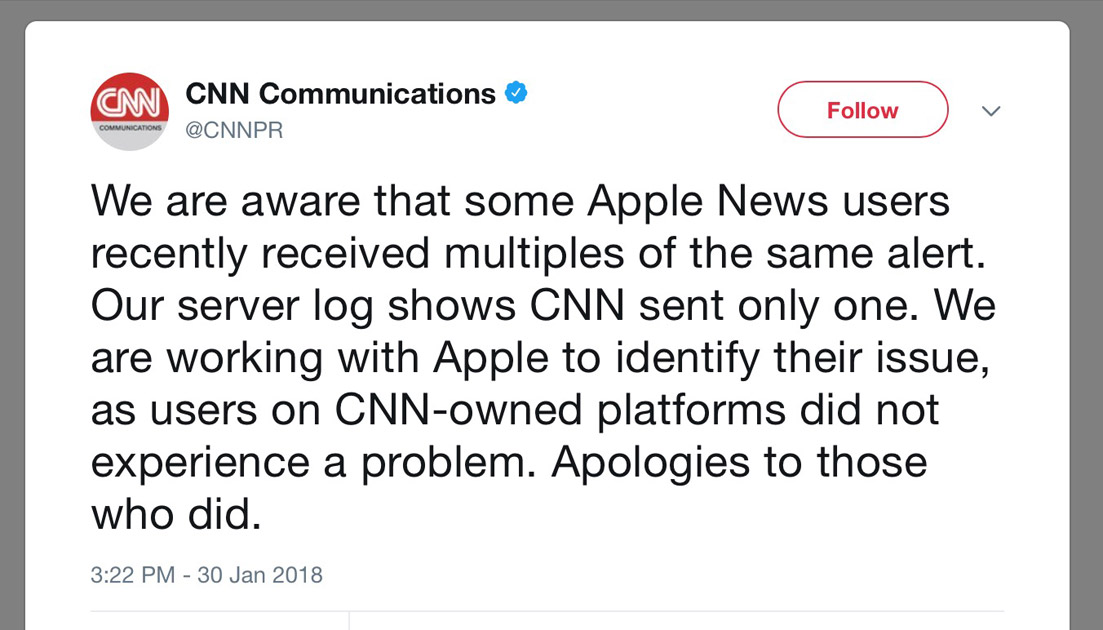 [Update: I personally noticed this issue when I got a flurry of Notifications from Fox News and went looking for info. So far, I’ve only seen reports of this issue with CNN and Fox News. – Bryan]

We are aware that some Apple News users recently received multiples of the same alert. Our server log shows CNN sent only one. We are working with Apple to identify their issue, as users on CNN-owned platforms did not experience a problem. Apologies to those who did.

Apple hasn’t yet addressed the issue, but with the State of the Uniom address tonight, many people might be experiencing this problem. Until Apple fixes it, you may want to turn off Apple News Notifications. You can do so in two ways.

The second is go to the Apple News app > Following > Subscriptions. Any news source you’ve chosen to follow or subscribe to will have a bell button on the right, as shown below. If that bell is blue, you receive notifications for major stories from that source. If it’s gray, you don’t. Make sure to scroll down to News Editors, too, which are alerts curated by Apple.

If you like and use your Apple New Notifications, be sure and come back in a day or two to turn them back on. Apple is likely working on this as I write.

I absolutely love the News app for iOS! I wish they made a Mac equivalent! Already sent my feedback request to Apple, and hope more folks out there may feel the same!
https://www.apple.com/feedback/

This must have been CNN specific.
I have New York Times & Washington Post notifications selected in the Apple News APP and did not receive multiple notifications.

I got a flurry of notifications from Fox News. So far, I’ve only seen reports of CNN and Fox News. I’m going to edit the piece o make that more clear, and I appreciate the note, joe.

BBC World Service had no issue.

I try my best not to silo.