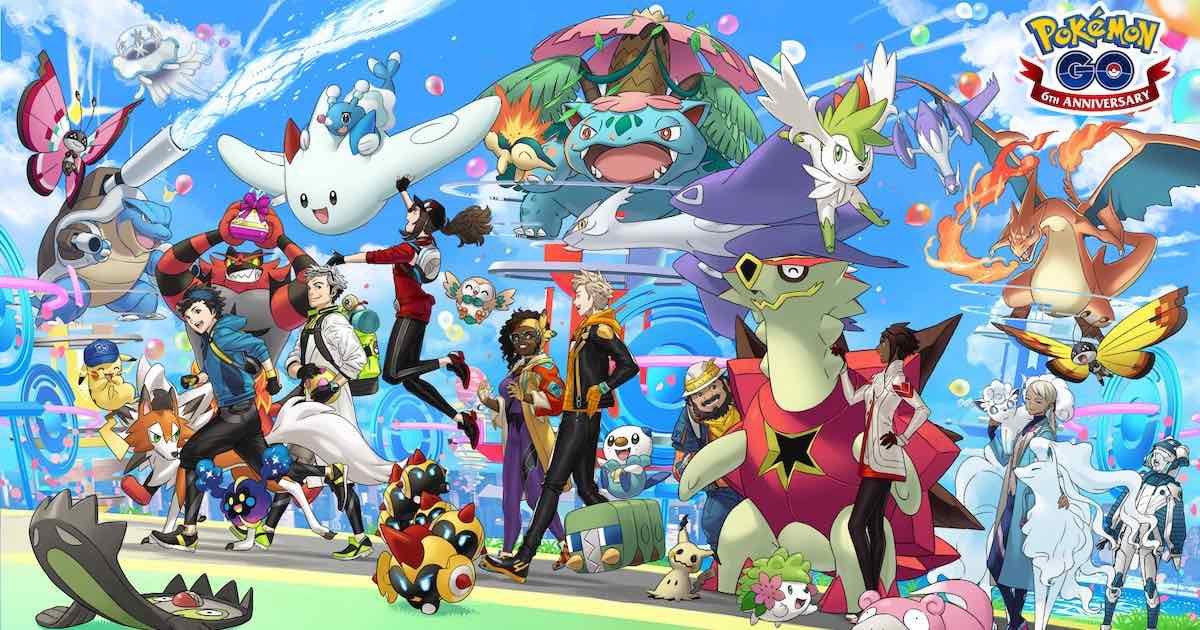 Today users are celebrating the sixth anniversary of Pokémon GO. Released on July 6, 2016, the mobile gaming app has taken an incredibly long journey to where it is today. Niantic, the creators of the game, are celebrating in true Pokémon GO fashion.

With Pokémon GO being one of the largest games to ever arrive to the Apple App Store, let’s take a (very) brief look at the history of the game, and what’s in store for the anniversary event.

In a statement, Niantic stated,

Today marks a very special day—it’s the sixth anniversary of Pokémon GO! What an adventure it’s been!

Whether it encourages you to hike through mountains, discover new landmarks right in your backyard, or catch, trade, and battle Pokémon with friends, Pokémon GO continues to bring Trainers together in new and unexpected ways, all while highlighting the friendship and bonds we can make with each other—and with Pokémon!

Things aren’t going to slow down in our sixth year, either. We’ve got an Anniversary Event right around the corner to mark the occasion, and Pokémon like Charizard and Pikachu are dressed up and ready to celebrate!

For the event, Niantic wants to celebrate Pokémon GO likes it’s 2016. For this, the company is focusing on the number 6 during the celebration. This year’s anniversary event will focus on Charizard, who is #006 in the Pokédex. Charizard will appear in three star raids and in the wild wearing a special birthday hat. Those that are truly lucky might even find a shiny Charizard wearing a hat!

Watch PokéDaxi break down the entire anniversary event in his YouTube Video:

Furthermore, the anniversary event will also feature event-themed Field Research, Timed Research and a special Battle Weekend. Other special Pokémon will also be making an appearance during this event.

A Bit of History

Originally launched in 2016, the game arrived to incredible fan-fair. Implementing augmented reality, users flocked to the App Store to download the game. At the time, the game was so popular that Pokémon GO received the most downloads in a week over any other app. This is despite initially launching in only New Zealand, Australia and the U.S.

By July 13, 2016, the game had around 21 million daily active users. With Pokémon GO being one of the largest games in mobile history only a couple of weeks in, it was hard to keep that pace.

Bugs plagued the game, only the first 150 Pokémon were available, and a majority of promised features were lacking or completely missing. Additionally, the game got in some trouble due to its rising popularity, as well as where some Pokéstops were located. By only September 2016, the game would lose a staggering 79% of its paying players.

While the game has continued to see success, Pokémon GO has yet to reach the numbers it has in 2016.

As someone who downloaded the game on the first day and never stopped playing, it has been absolutely fascinating watching the game evolve. The amount of friends I have made who enjoy catching, raiding and training through Pokémon GO is something I will never forget. From the first days of watching the entire world play, to the current era where new and old players play together, it’s been an awesome journey.

While it likely will never regain the magic it saw in 2016, that hasn’t stopped Niantic from continuing to develop Pokémon GO. With more features than ever, those that fell out of interest in 2016 may want to give the game another chance.