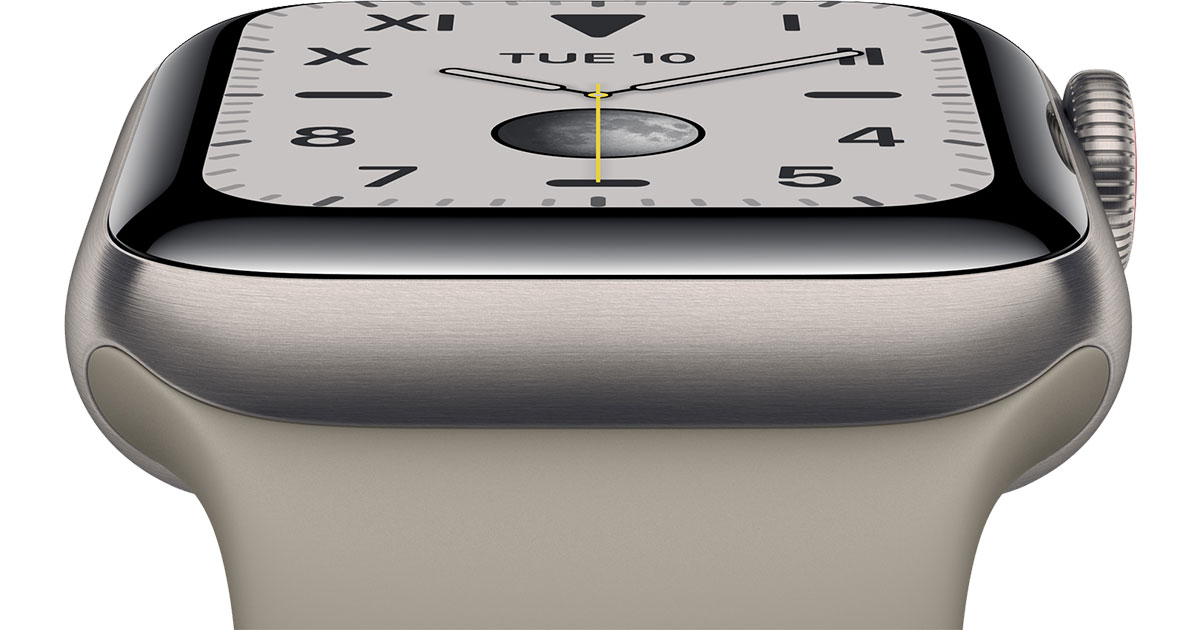 The sleeper hit feature, however, may be the ability to match the strap you want to the case you want using Apple Watch Studio. That feature is available online and in Apple retail locations.

All models come in a 40mm or 44mm case, just like Apple Watch Series 4.

Apple Watch Series 5 features an always-on Retina display. This feature means your Apple Watch Face will always be visible and won’t go to sleep. No more activating your watch by touching it to your nose while you’re cooking or working on your car.

Apple is adding a compass to Apple Watch Series 5. This will be available to the user via a Compass app and a Compass complication for immediate access. This will be useful to outdoorsy types, and it doesn’t depend on your iPhone. Developers will also be able to access the Compass sensor for third party apps.

For materials fiends, Apple Watch Series 5 will be available in Aluminum and Stainless Steel, but it also sees the return of Ceramic (white) and the addition of Titanium as “Apple Watch Edition” options. Apple is also adding a Black Stainless Steel finish, while Titanium will also be available in Space Black, in addition to a more natural gray/bronzy titanium color. Both Titanium cases are brushed.

According to Apple, the, “natural titanium has a custom-engineered surface which helps maintain its color and resist staining, while the space black titanium achieves its deep color from a diamond-like coating (DLC).”

The aluminum models will all be made from 1005 recycled aluminum.

Apple Watch Nike will be an option for Apple Watch Series 5, though not through Apple Watch Studio. Apple Watch Hermès is also being updated, with  several new styles. Apple said the color block band will be available in a new Della Cavalleria print, while an all-black version with an exclusive Hermès gradient watch face will also be available.

Here are the starting prices for the different Apple Watch Series 5 models:

All models are available for pre-order now, with a ship date of September 20th.

[Correction: This story was corrected to note that Apple Watch Series 5 comes in 40mm and 44mm sizes]

I am assuming the Series 4 and earlier watch bands are compatible with the Series 5.

I believe they will fit either size watch.

They’re the same mechanism. This is something I am glad Apple has done correctly. 🙂

Well that it is good that it is the same. I am sure that the charger also didn’t change.