During Apple’s “Let’s Meet at Our Place” event on September 12, Cupertino unveiled the new Apple Watch Series 3. The announcement came on the stage of the Steve Jobs Theater on the new Apple Park Campus. Cupertino revealed the new wearable device alongside the tenth anniversary iPhone, the iPhone X. The new wearable device boasts one great new feature. Most of the rest of the changes are cosmetic and pretty subtle.

Each model of the new Apple Watch Series 3 is now split into two variants: non-LTE and LTE. The LTE model of the Apple Watch is noticeable by a red accent on the Digital Crown. The antenna, supporting both UMTS and LTE, is embedded within the entire display. 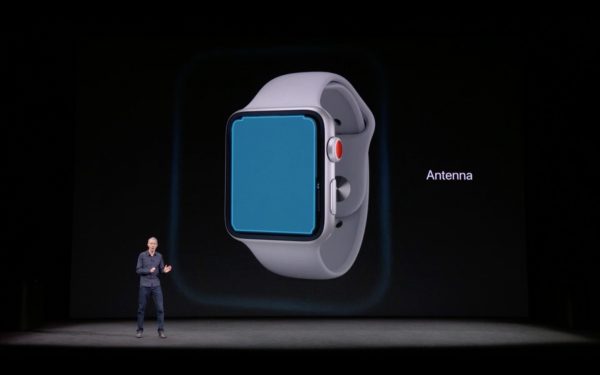 Noted KGI Securities analyst Ming-Chi Kuo predicted the cellular capability of Apple Watch 3. The analyst’s thought, though, was that it would only be for data connectivity.

In the iOS 11 GM leak, however, we noticed a new phone complication on the Watch face. We also spotted as a signal meter. The phone complication hinted at calling capabilities, which Apple confirmed during the event. With an LTE-capable Apple Watch Series 3, you can place calls using your Apple Watch. This even works when you don’t have your iPhone at hand.

The LTE chip also allows you to enjoy streaming data, untethered from your iPhone. That means you can listen to Apple Music, Spotify, Pandora, or other streaming music services even when you’ve left your iPhone behind. Apple Music will be installed directly on the device, allowing you to stream the service from day one without your iPhone nearby.

A new Sports Loop band was introduced, along with new Hermés choices.

You can order the new Apple Watch Series 3 in space gray and silver aluminum colors, along with a new gold aluminum. In stainless steel, you can choose from space black or stainless. Finally, a single-color ceramic case option that has been available since the Apple Watch Series 2 is still there, but you actually have a couple more color options.

In the aluminum models, there is now the new aluminum gold color, and a gray color provides another selection for the ceramic case of the Apple Watch Series 3 Edition.

The LTE connectivity should be available through AT&T, Sprint, T-Mobile, and Verizon. Both AT&T and Verizon have stated that the service will incur an additional $10 per month charge, but there’s been no word yet on LTE pricing from Sprint or T-Mobile. Verizon’s plan includes three free months of LTE service for your Apple Watch Series 3.

Customers will be able to preorder Apple Watch Series 3 beginning Friday, September 15, and the devices will begin shipping on September 22.

You mentioned that the new Apple Watch Series 3 is available in rose gold. However, I’m not seeing a specific rose gold option online. All I see is what they call “gold aluminum”. When I try to compare pictures of the new gold aluminum with the old rose gold, it does appear that there is still a difference–although I would still prefer to have an actual rose gold option.

Sorry, that was a mistake on my part. There’s no rose gold option for the Apple Watch Series 3 aluminum.

When on the charging plate the Apple Watch probably won’t be in the night stand mode. I guess that’s no big deal, since I often knock mine over or spin it so I can’t see the screen when I try to tap it to see the time anyway. (I’m too cheap to buy a charging stand.)

I have a number of obsolete charging stands so I just stopped buying them, Apple too frequently changed the connectors. This new charging pad may be worth the money, depending on the cost. 😀

when I try to tap it to see the time anyway

The charging pad looks like the future Apple device charging. It will really go well with my new watch, phone, etc.
Now to win the lotto so I can buy the rest of the Apple stuff I want.

I want to know what the cellular plans cost. They mentioned AT&T has one and that there will be introductory rates, but no hint as to the data limits or costs, or whether it would tie into the data plan for your iPhone.

AT&T and Verizon have said $10/month, with Verizon offering 3 free months. No word from Sprint or T-Mobile.

Is the charging cable the same?

Apple didn’t specify, but it appears it would be. There’s also a new AirPower mat coming, which will support Qi charging of the iPhone 8, iPhone 8 Plus, iPhone X, Apple Watch Series 3, and a new AirPods case.

Thanks Jeff, I am hoping that is the case as I have several Apple Watch charging stations.