I recently noticed an almost-feature in the iOS 11 beta. I say “almost-feature,” because the option is there but doesn’t do anything. You may soon be able to not only record your screen, but use screen sharing in iOS 11. Here’s how I predict it will function.

It appears that Screen Sharing is coming soon to iOS 11

Not long after the first iOS 11 beta released, I showed you how you could record your iPhone or iPad screen without an app. The feature has matured and gotten better. For instance, it doesn’t say “Recording” at the top of the screen anymore. There are still bugs and inconsistencies, but it’s definitely improved.

With the latest developer beta of iOS 11, another option has popped up. Assuming you have the Screen Recording button in your Control Center, 3D Touch brings up a new menu for the tool. When you 3D Touch the control, you can now see an option labeled “Start Broadcast.” That’s all you can see, though, because it doesn’t do anything yet. You can tap on the button until you’re blue in the face, and nothing will happen. Eventually, though, it could be used for screen sharing. 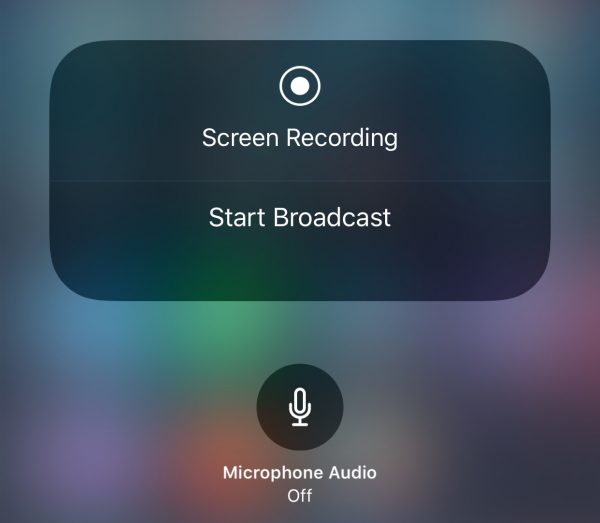 If you 3D Touch the Screen Recorder control in the iOS 11 Control Center, a new option appears

What Screen Recording Should Do in iOS 11

Of course, Apple isn’t commenting on this almost-feature. We can speculate, though. We already know that iOS 11 saves screen recordings to the Photo Library, so it’s safe to assume Start Broadcast will tie into the iOS native apps somehow. That means FaceTime and/or AirPlay.

What I suspect will happen is that the Screen Recording tool will allow you to live-stream your iPhone or iPad screen using FaceTime. That way, you’ll be able to send your screen to someone else. You could use this to show them how something works (or doesn’t work), or demonstrate an app in action for them. This could be great for teaching Grandpa how to use a photo editing app. It also would hold plenty of potential for other support situations, like helping a client troubleshoot a problem.

Other Possibilities for Start Broadcast in iOS 11

This feature could also tie into AirPlay. It would offer another way to stream your screen to your Apple TV or smart television. We’ll have to wait and see, since the feature doesn’t do anything just yet. It’s just one more reason for me to look forward to the next developer beta, when it hopefully has some functionality. The developer beta and Public Beta of iOS 11 are well underway. We expect Apple to fully release the new version sometime in Fall 2017.