Super Mario Run for the iPhone and iPad is free to play, but that’s a little misleading. Without making the US$9.99 in-app purchase to unlock all of the game’s levels, there isn’t much you can do. Read on to see what your ten dollars gets you.

Free is a great price, but you tend to get what you pay for. In this case, that means the first three World Tour levels and 20 seconds of preview play after that. You also get a few tickets to play the Toad Rally mode. 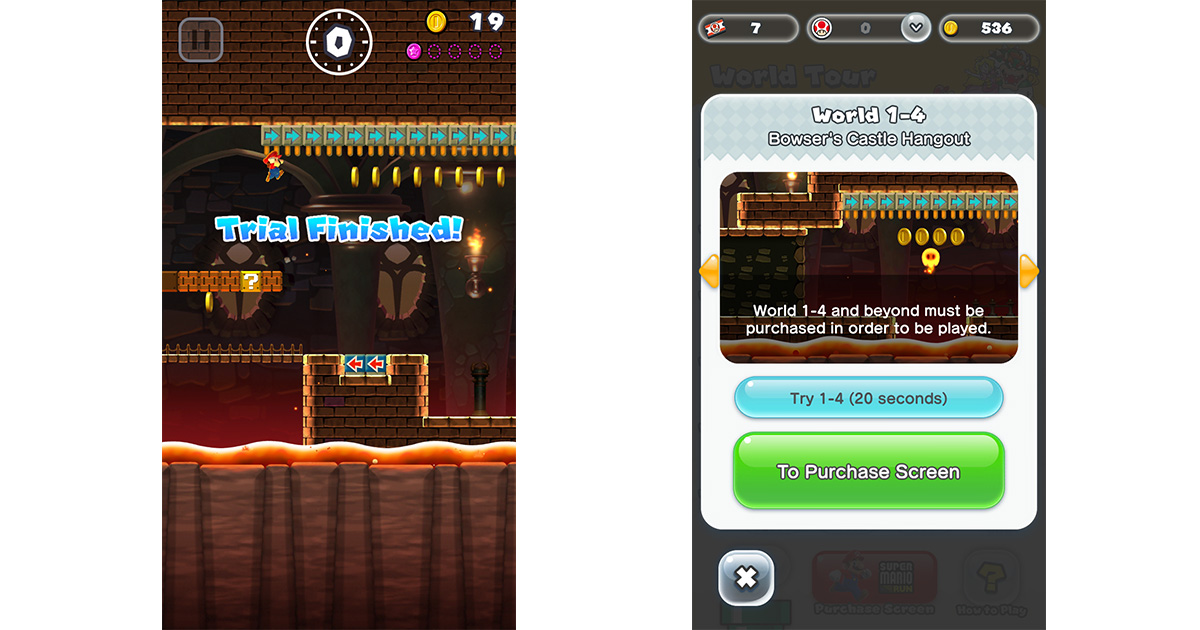 You can play the first three Super Mario Run levels for free, then it’s 20 second tryouts

You score points in Toad Rally by impressing the game’s race watchers with clever moves and acrobatics as you complete the course. You can use your winnings and collected coins to build your own town in Kingdom Builder mode.

The game awards you more rally tickets depending on how well you perform on each World Tour level, so you aren’t locked out of Toad Rally after burning through your initial batch.

Nintendo is essentially giving us a free trial mode with a $9.99 price tag to unlock the full game.

Your $9.99 in-app purchase unlocks all 24 World Tour levels, but you’ll still have to work through them sequentially. Once you complete a level you can return to it any time to collect more coins and try for a higher score. 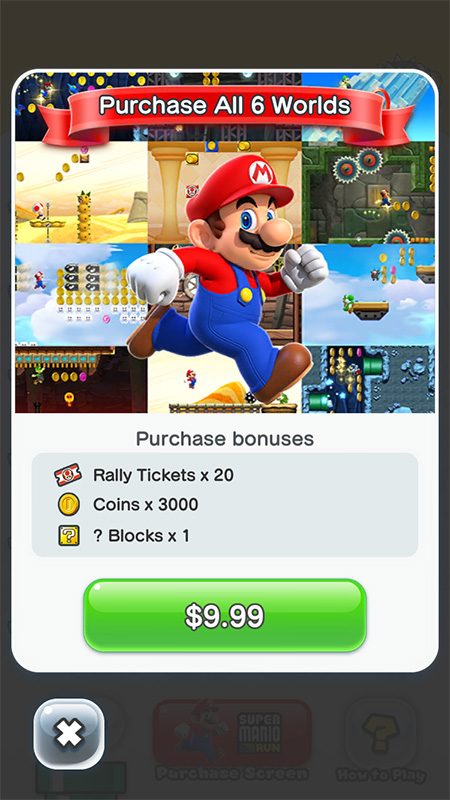 You also get 20 Toad Rally tickets and 3,000 coins, all of which is handy in Kingdom Builder Mode. Creating your kingdom has benefits, too, like unlocking other characters you can play.

There aren’t any other in-app purchases, although the coins you collect in-game can be traded for items such as elements for your kingdom.

Since you collect coins every time you play a level there’s essentially an unlimited supply of in-game currency. The periodic rally ticket rewards mean you won’t get locked out of Toad Rally, too. 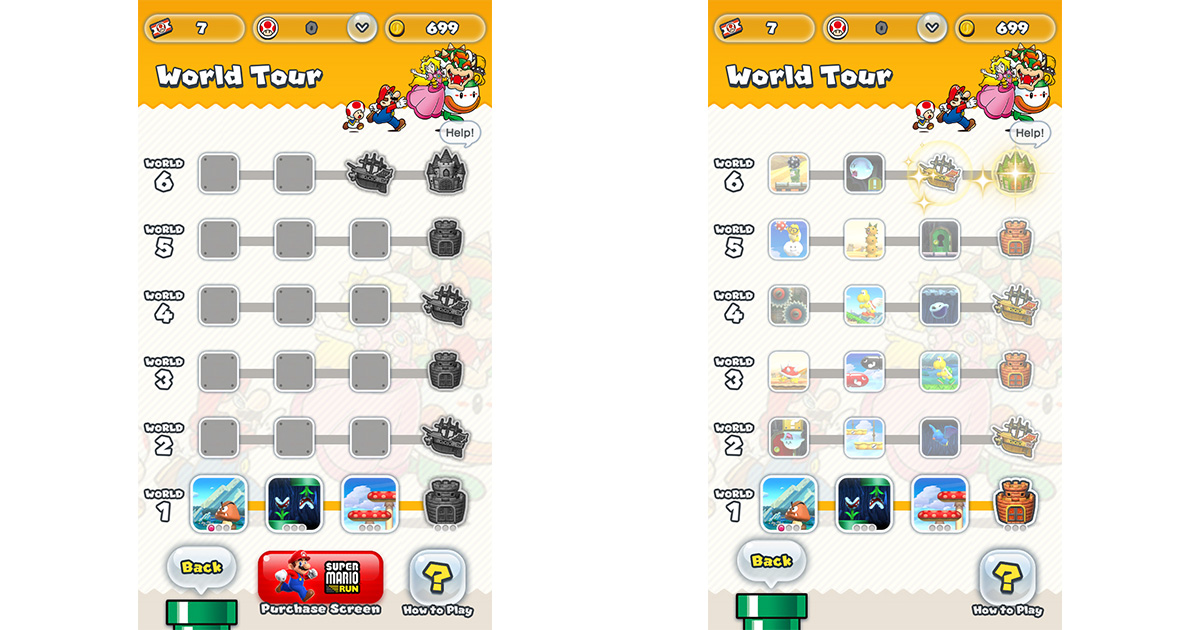 Buying the game unlock doesn’t, however, support family sharing. That means you can’t pay to unlock once and open the full game for everyone in a family sharing group.

Should You Buy Super Mario Run?

Video games are very subjective, so there isn’t a definitive yes or no answer to that question. What we can say is if you’re a Super Mario fan, or enjoy platform runner games, the in-app purchase to unlock all the levels makes sense. After all, it’s a fun and easy to play game.

If you aren’t sure if Super Mario Run is worth the $9.99 price tag, download it for free play the first three levels. You’ll know fairly quickly if paying for the unlock is worth it—and based on how much money Nintendo has made on Super Mario Run so far, there’s a good chance you’ll pay up.

Great awesome content. Thanks for sharing with us
Indoor Navigation Mobile Application

This is really very nice blog and so informative.
develop an app like 99Acres

Well-researched, thought and inspiration provoking! Loaded with great info. I’m in the process of taking a different approach to my coaching, and this is a perfect resource to save. Thank you for the perfection! read more active directory domain services

Your post has many detail information. I read all of your article and I genuinely like it. Thank you for discussing this great post. Valentines Day HD Wallpapers

This is really very nice blog and so informative. Thanks a lot for sharing this article. to read more

In this Christmas everyone wishes each other by the quote of “Merry Christmas” and go to another’s house to exchange wishes and gifts.To know more Please view my blog Christmas Wallpaper

” I really question what all the fuss is about.”

It replaced Pokeman, next month or so Defender will replace Mario.

I really question what all the fuss is about.”

It replaced Pokeman, next month or so Defender will replace Mario.

This game isn’t at all entertaining. I really question what all the fuss is about. The automatic running and vaulting take all the fun out of the original Super Mario!