There’s no question that iTunes is a mess. It’s bloated, but it’s all Apple gives us (on the Mac, anyways) to load media onto our iPhone, iPad, or iPod touch. One problem is that iTunes limits the audio and video file formats we can upload. Many of us continuously look for other apps to help us transfer our media files to the iPhone and other iDevices. WALTR is one that Jeff Gamet has tried and recommended, and that app is now in its second version with new features. Let’s see how well it works as an iTunes replacement. 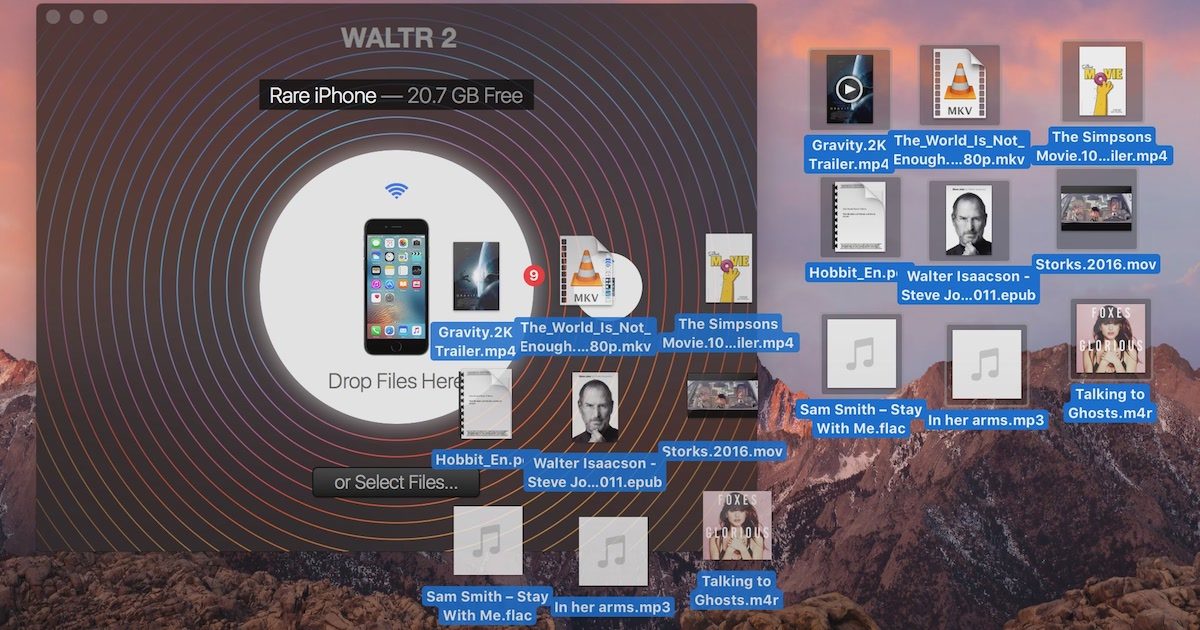 Comprehensive Device and Format Support Is Important In an iTunes Replacement

WALTR 2 goes way beyond just your iOS device. Still kicking around an iPod Classic and want to copy media files to it sans iTunes? WALTR 2 is capable of doing that. Softorino, the developers behind WALTR 2, spent four years researching the data-write protocols Apple used for each generation of device, enabling a secure connection with the proper protocol for every one.

Even better, WALTR 2 supports just about any music or video file format, even Apple Music files. Windows Media files (WMA), often the bane of Mac users, work just fine through WALTR 2. Have a collection of 4K Ultra HD videos you want to transfer? No problem. The app also works with ePub and iBooks files, along with PDFs. With its Smart Adaptive Conversion, WALTR 2 is able to convert your video and audio files to what your device can use, on the fly and very quickly.

Everything Goes Where It Should

I put together a folder of various files to pass from WALTR 2 into my iPhone 7. I included PDFs, ePub files, a couple of iBooks files, along with music and video files of various types. WALTR 2 quickly and seamlessly transferred all of them. They even went into the right places: the PDFs and eBooks showed up in iBooks, the videos in TV, and the music went exactly where it should have. 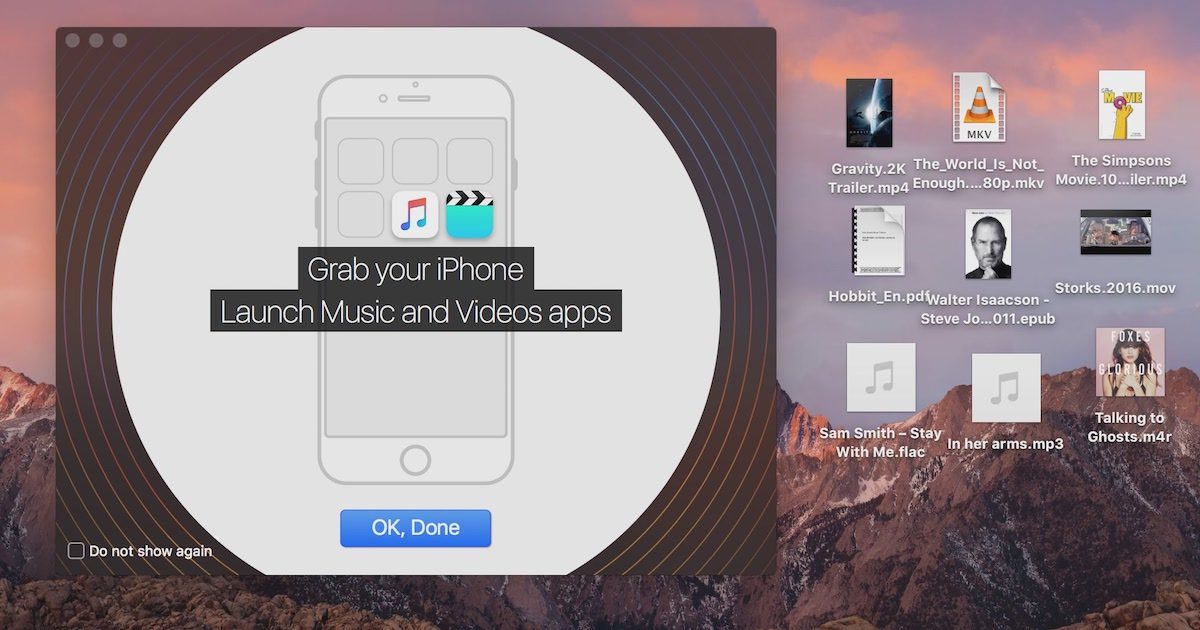 Transferring multiple types of files at once works flawlessly

Transfer Over USB or Wi-Fi

WALTR 2 includes Wi-FI support in addition to transferring files over USB. It even includes advanced connection stitching, so if you disconnect your USB cable while transferring files, things don’t stop. WALTR 2 just looks for your iOS device wirelessly and resumes the connection over Wi-Fi. 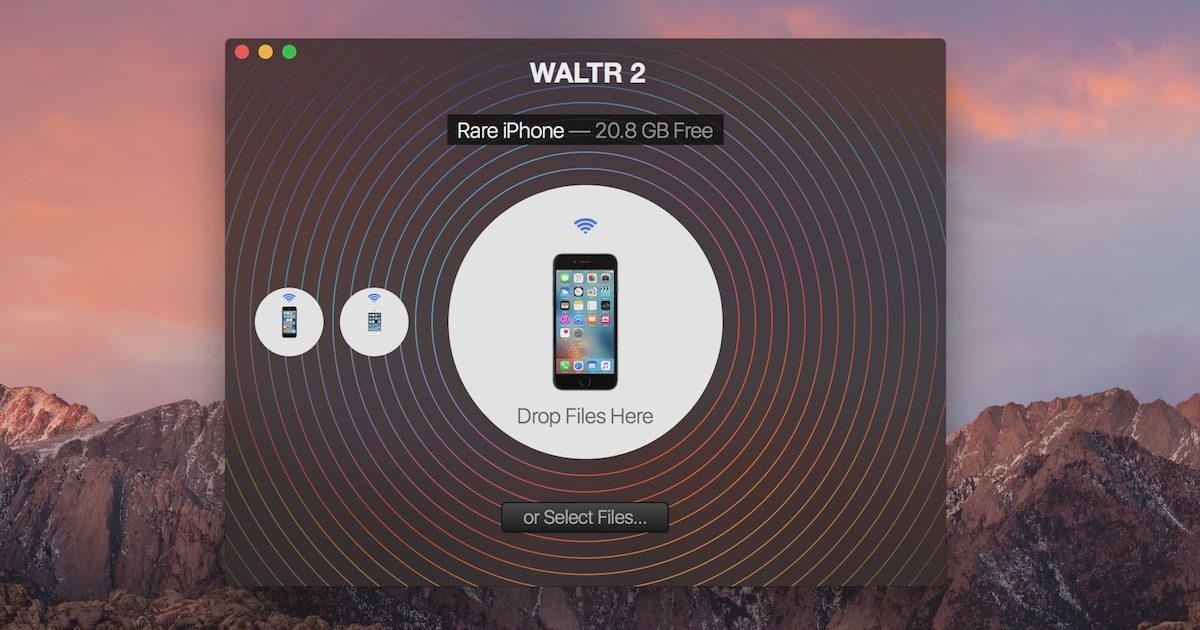 With WALTR 2, you can switch seamlessly between a USB and Wi-FI connection when transferring files

Not Everything Is Perfect, Unfortunately

WALTR 2 has a feature called Automatic Content Recognition. With ACR, you should get all of the meta information for your content filled in where it’s missing, so your music and videos look like they were purchased from the iTunes Store. ACR is supposed to pull in cover art, cast or artist information, synopsis, and so forth. Unfortunately, in my testing, that never worked.

The good news is that WALTR 2 works very well at transferring media files to any Apple device. It converts files on the fly, keeping lossy files in a supported lossy format. This means you can send newer file formats into your iPod Classic, and they’ll automatically get converted to something that will work on that device.

WALTR 2 is flexible enough not only to support almost any media file format, but it doesn’t tie you to your computer. The automatic Wi-Fi connection stitching works flawlessly, letting you disconnect from your computer and keep transferring your music, books, and video files. WALTR 2 even supports 4K Ultra HD videos.

While WALTR 2 is powerful in what does work, it doesn’t operate completely as advertised. I was looking forward to the meta information being fed into my non-iTunes files, but that simply didn’t happen. Hoping it was just a problem on my end, I had Dave Hamilton try it as well. He achieved the same non-results. No meta information gets applied to the files when they pass through WALTR 2, and that’s unfortunate.

Another problem with this software is that you cannot use it to delete files. For that, you have to go through iOS and remove the files.

This is an amazing piece of software, but it’s priced a bit too high for my liking. Softorino charges US$39.95 for WALTR 2, which is on par with other competitors that offer more functionality. If the Automatic Content Recognition worked, I’d be more happy with the price point.

Fortunately, you can try WALTR 2 for free. If you find that Automatic Content Recognition works for you and you maintain a library of files without cover art or other meta data, it’s certainly worth $39.95.

MacOS 10.9/Windows 7 or newer. All Apple mobile devices are supported starting from iOS 5 including every single non-iOS iPod ever created.

Supports almost any music, video, and eBook format; allows you to copy 4K UHD videos to your iOS device; lightweight and compact software

Automatic Content Recognition doesn’t work as advertised, no means for deleting files from your device

A couple of things thing you didn’t mention

1) it doesn’t seem to do a check to see if a song is already there. drag an album on . it goes on, drag again , it goes on and its there twice

2) there is no option to set a conversion rate for mp3 and mac files. there is a option to down convert lossless to AAC but no bit rates choice and no option for higher bit rate mp3 and aac

bdkennedy1: be that as it may, the web site for this product prominently offers a free trial.

Would be nice though to have information about and control over video re-encoding parameters. I currently use Handbrake for this and it’s always a challenge to guess at proper settings to trade off quality vs. size. Full quality is usually not the right choice for an iDevice.

Are there other iTunes alternatives?

Sorry, Paul, it doesn’t. It’s a simple drag-and-drop affair. You drag your files into the app, and it puts them in their proper place on your iPod, iPhone, or iPad.

Does it do song lists and star ratings?

I don’t care how good a product is, no trial period is an instant deal breaker.