I’ve run across a recurring problem with clients in which older devices will ask for iCloud passwords over and over again, and the prompts won’t stop coming despite the user entering the correct one multiple times. They’re seeing something like this:

And if they click “iCloud Preferences” on that box, it’ll take them to a place where they get stuck in a never-ending loop of typing in the right password.

Or they’ll enter the password, it’ll seem to accept it, but then it’ll pop up the same dialog box again in five minutes or after a reboot. Annoying!

A possible cause for this—and a particularly frustrating one—is that the user has enabled two-factor authentication for his Apple ID using an up-to-date device (one running at least El Capitan or iOS 9, as Apple points out here), leaving his older, less updated devices out in the cold. Which doesn’t mean you can’t get this working, understand, but it’s not exactly clear how because your devices won’t tell you! I feel like this is a pretty big, upsetting mistake on Apple’s part, especially considering how hard they’re pushing for everyone to turn on two-factor authentication. I think that service is awesome, of course, and it’s great for security—that is, as long as your older devices don’t ask and ask and ASK for your passwords without letting you know why they won’t work.

Anyhow, one way you can fix this is as follows: Reboot your older device (a Mac running Yosemite or whatever), and then when you see the password prompt, try entering the correct one once. This should send a familiar notification to your newer devices that someone is trying to log in, like so: 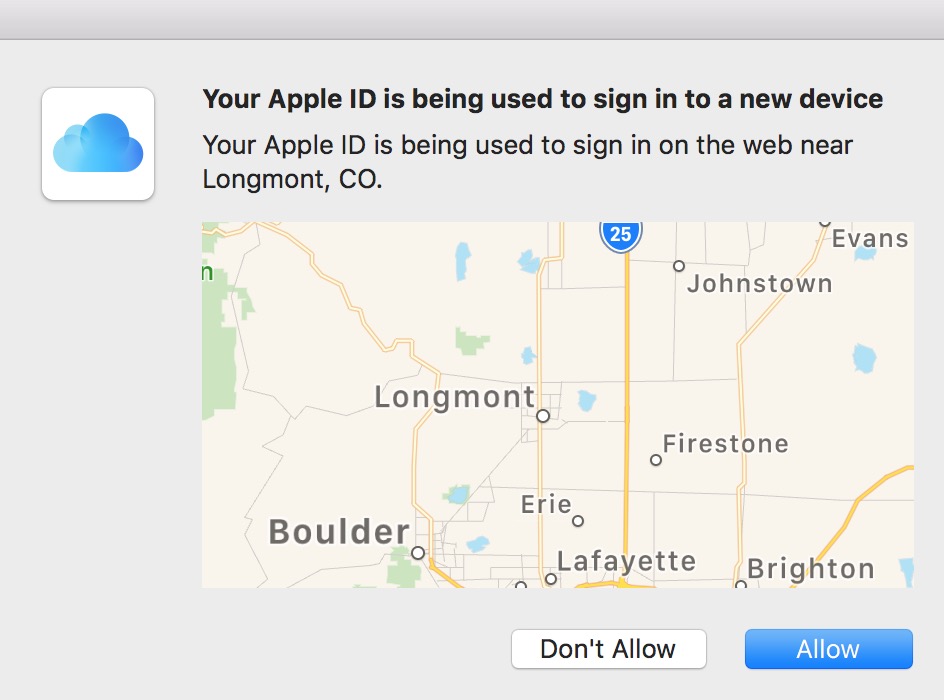 Click “Allow” on your up-to-date device, then note the six-digit code you’ll need to authorize the older one.

On the older device, you’ll then type in the Apple ID password followed by the code you’ve been given with no spaces in between. So if your password is “password,” you’d type in “password725901” if you had my code shown above, for example. Your older device should then accept the password, and away you go.

Of course, if your older Mac, iPhone, or iPad never sends any kind of prompt to your newer devices, then you’re in a bit of a pickle. You could try signing out of iCloud within System Preferences and signing back in. Or you could attempt to generate and use a security code from a newer device, which I’ve written about before. In any case, though, this may just mean you can keep on using that Yosemite iMac without getting constantly bombarded with requests for your password. A user can dream, right?

Thanks a million – I hope this “sticks”. It did ask me twice (perhaps I typed it wrong, hard to say) but after the second time, it hasn’t been asking. This has been annoying me for almost a year!!

Been unable to sign into System Preferences>Internet Accounts>Facebook , so I added the 2FA from Authy to the password as you described, and I seem (for the moment) to be able to now “Share” from Photos to Facebook again…

forgot to mention that I’d been unable to add Facebook to the Internet Accounts in System Preferences for some weeks. No matter how many times I tried, I couldn’t get Internet Accounts to accept my “user ID” and password.

But following your suggestion to add the 2FA code to the password, did the trick.

So thanks very much for this most excellent tip !