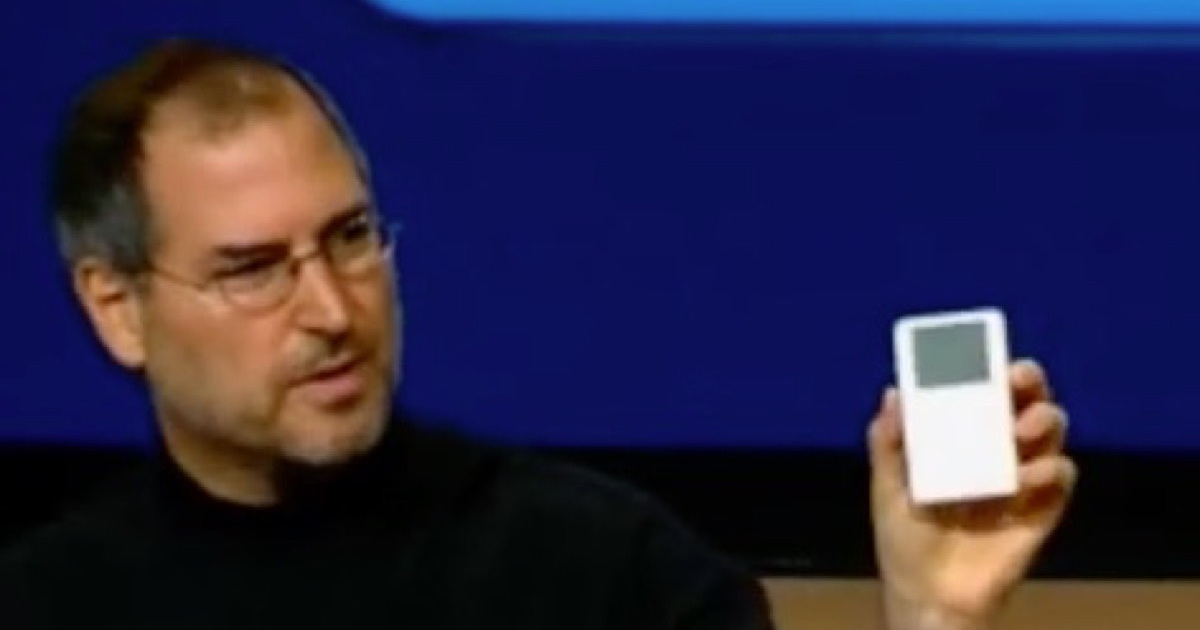 Today, Apple quietly announced that the iPod nano and iPod shuffle have been discontinued:

Today, we are simplifying our iPod lineup with two models of iPod touch now with double the capacity starting at just $199 and we are discontinuing the iPod shuffle and iPod nano.

I suppose a few people will be greatly annoyed. Others won’t care. iPod sales are so embarrassingly low now, Apple hasn’t reported the sales numbers for years. The iPhone is the new music player. (And for some, the iPod touch—which endures for now.)

But I have a story to tell.

It was early October, 2001. I was at home in Colorado when my boss called. He was his usual blunt but friendly self. “Make arrangements to be on campus for an event on October 23rd. This is important.”

So I called Apple travel and set up a flight and hotel for the day before. There was an aura of mystery and urgency in my boss’s voice, and I was excited. I showed up on time at Town Hall at Infinite Loop. I would not be disappointed.

There are videos of the Apple event, so I won’t go into a lot of detail. There were lots of charts and figures and discussion about the music industry.  What I remember most, however, was the first time I was in the same room with Steve Jobs. He was in his prime. He was in control. The first iMacs had shipped, and the product was an amazing success. He was very, very confident.

As Mr. Jobs began to spin his magical story about music, it became more and more clear that this was no boondoggle. It wasn’t a distraction from Apple’s core competency of Macs. Mr. Jobs, who was very much involved? obsessed? in love with music as a key component of the modern culture, made his case to us.

By the time he was done, it seemed perfectly natural for Apple to make a music player. Its design blew everything else out of the water. It was beautiful. It was well engineered. It was to be coveted. Apple had worked with a partner to build a near-miraculous miniature 5 GB hard disk inside. “A thousand songs in your pocket,” he said with a grin and some charm. It synced nicely with music you’d ripped into iTunes. (The iTunes store would come along later in 2003.) We were in awe.

By the time Mr. Jobs was done, it was clear why my boss had required me to be present. At that very moment, as Mr. Jobs slid the iPod out of his jeans pocket, there was never any doubt in my mind that Mr. Jobs was launching Apple into a new adventure. Apple would never again be just a boutique computer company. Apple was about to launch the digital hub revolution that would integrate music, photos and videos to a single structure that would weave itself into our lives. And with large doses of taste and giddiness that only Apple engineers could conjure up.

It’s said that without the iPod, the iPhone wouldn’t have been possible, and I believe that. Apple, under Steve Jobs, came to realize that it could bring a new perspective and set of integrated electronics to our lives. Sony started on that path, but never quite got there the way Apple did.

The iPod might be the most important product ever produced because it cast Apple from being a so-called toy computer company into an integral part of our modern tech culture via the avenue of a powerful medium: music. It forever changed Apple. And the world.

I’m sitting here with my iPhone 7, eagerly thinking about what may come in September. I’m not very sad that the iPod is fading from our lives. That’s how the industry goes. I’m looking forward to what Apple can do next. But I won’t forget what came before and the role the iPod played.