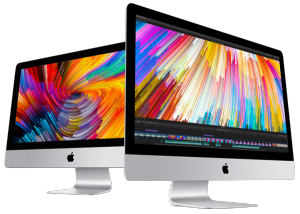 One of the major product announcements during Apple’s action-packed WWDC 2017 keynote this week was the updated iMac. Sporting the latest hardware — including Kaby Lake processors, AMD RX 580 GPUs, Thunderbolt 3, and even faster NVMe flash storage — the new iMacs finally provided the serious upgrade that all-in-one Mac fans had been waiting for.

But one technical specification of the new systems introduced a few quirky notes and caveats: the RAM. Apple fans know that the company has a bit of an odd relationship with consumers when it comes to Mac RAM. From highly inflated RAM upgrade prices, to non-user-upgradeable RAM in most of its Mac configurations, to conflicting “official” RAM limits, things can be a bit confusing these days for anyone looking to buy or upgrade a Mac.

Keeping with this awkward tradition, the RAM situation for Apple’s new iMacs is still just as confusing. So here’s a quick rundown of what we know so far when it comes to system memory on these new iMacs.

The upcoming iMac Pro, set for release this December, is an entirely different beast. Unlike the “standard” iMac, the iMac Pro uses error-correcting code (ECC) memory, which helps counter any errors or corruption that may occur while data is stored in memory. This is crucial for the reliability of mission critical applications and databases, although its benefits likely won’t be noticed by most prospective iMac Pro buyers who are primarily interested in the system’s computational and graphical capabilities.

While “mobile” size SO-DIMMs with ECC exist, early marketing images from Apple indicate that the company is instead using full-size DIMMs in the iMac Pro. This means that Apple needed to rearrange the components to fit the larger RAM modules inside the iMac Pro’s chassis. For consumers, it means that the RAM in the iMac Pro won’t be officially user-upgradeable.

The potentially good news is that those same marketing images — which, of course, may not represent the final design — show what appear to be socketed RAM slots. If true, iMac Pro owners could upgrade their RAM post-purchase, but only if they’d be willing to perform the complicated and risky iMac teardown procedure.

For those unwilling to do so, you’ll be stuck along with the owners of the standard 21.5-inch iMac in needing to purchase your RAM up-front from Apple. We don’t have upgrade pricing yet, but we do know that the iMac Pro’s $5,000 base configuration with ship with 32GB of RAM, and that buyers will have the option to upgrade to either 64GB or 128GB at purchase.

To answer my own question: The glass is glued down. Also, you have to remove the logic board to get to the RAM slots. Still, better than soldered-down.

It’s good to know they’ve taken a step back from complete lockdown. Do the new iMacs have magnetically-attached glass or is it glued down?

iFixit is reporting that the RAM on the 21.5″ iMac is not soldered on, so if you’re willing to take the screen off you can get to it and upgrade it. It’s not trivial, but I’ve done it on other iMacs and it’s definitely doable…

iFixit now reports the new 21.5 iMac uses replaceable RAM in the form of two SO-DIMM slots – for those daring enough to take the iMac apart.

“It’s good to know that you can still upgrade the RAM yourself.”

This is what makes some people hate Apple and now I find these products and policies no longer defensible. RAM was the last thing that you could count on to give your Mac a little boost after a few years (along with SSD storage if you are willing to tear apart an iMac). And the worst part is there is no practical reason for it; a few millimeters thinner and a few grams lighter make no difference in a desktop system.

My “new Mac” is an old HP minitower I bought on eBay.

It’s good to know that you can still upgrade the RAM yourself.