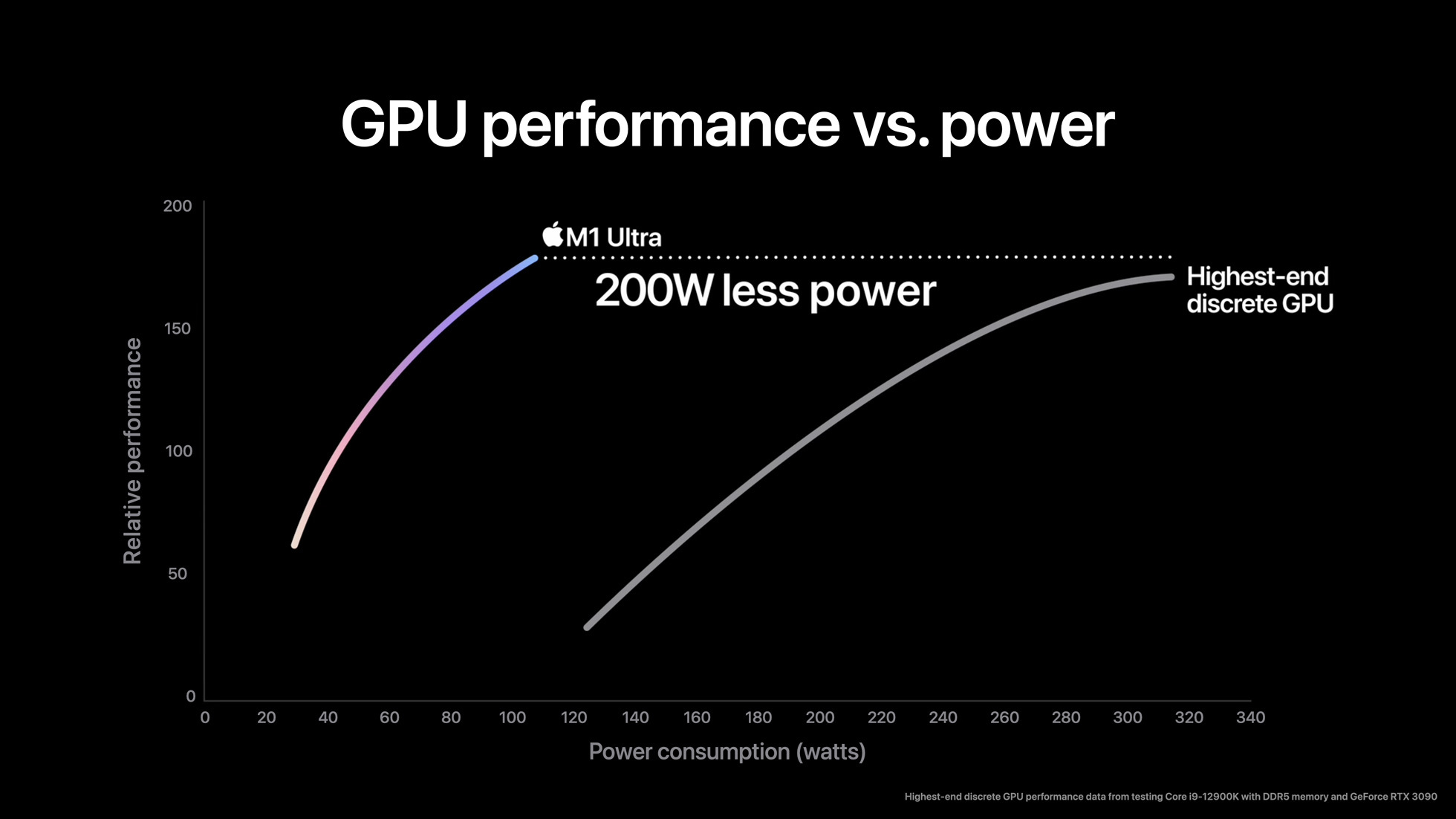 The graphic wars continue to rage. Apple claimed the M1 Ultra, with 64 GPU cores, just as powerful as the NVIDIA RTX 3090. Even bolder, the iPhone maker pointed out the M1 Ultra uses 200w less power than the RTX 3090. While this may sound great on paper, critics are discovering that this may not be the case.

The M1 Ultra, announced last week, is the latest and greatest chip for its new Mac Studio. With two M1 Max chips attached to each other, the M1 Ultra contains some beefy features under the hood. The M1 Ultra not only provides 21 TFLOPS of graphic computing power, it also has a cache of 128GB of unified memory. This is 5.3 times greater than the amount of memory that NVIDIA’s RTX 3090 can access.

Apple fired the first shots of this feud at its own announcement. During its event, when showcasing the power of the new M1 Ultra, Apple chose to pit the its chip against NVIDIA’s graphics card, claiming that its chip is superior.

Now that the embargo is  lifted on Mac Studio reviews, people are finding out this is not the case.

Using OpenCL API, Monica Chin of The Verge conducted multiple benchmarks on the M1 Ultra vs the the RTX 3090. Chin conducted the study through a series of tests: a standard benchmark with Geekbench 5, as well as testing through the game Shadow of the Tomb Raider. While the reviewer admits that the Mac Studio is not necessarily designed for gaming, the test was to determine the working load of the GPU.

The results are surprising.

It turns out that the M1 Ultra and NVIDIA’s RTX 3090 are not in the same league graphically. In fact, Apple’s latest chip significantly underperforms when compared to its counterpart. In the standard benchmark, even the Boxx Apex 4 workstation outclasses the M1 Ultra.

Ultimately, this is largely a big deal due to the shade Apple threw at its event. If not for that, people may have been less likely to care. Gaming and Apple have never really gone hand in hand. When it comes to designing products, Apple typically focuses on the needs of content creators, and its new products reflect that. The Mac Studio contains enough power to meet the needs of almost any consumer, and will perform almost any task with breeze.

When deciding what technology to buy next, be sure to do your research and determine what your needs are.