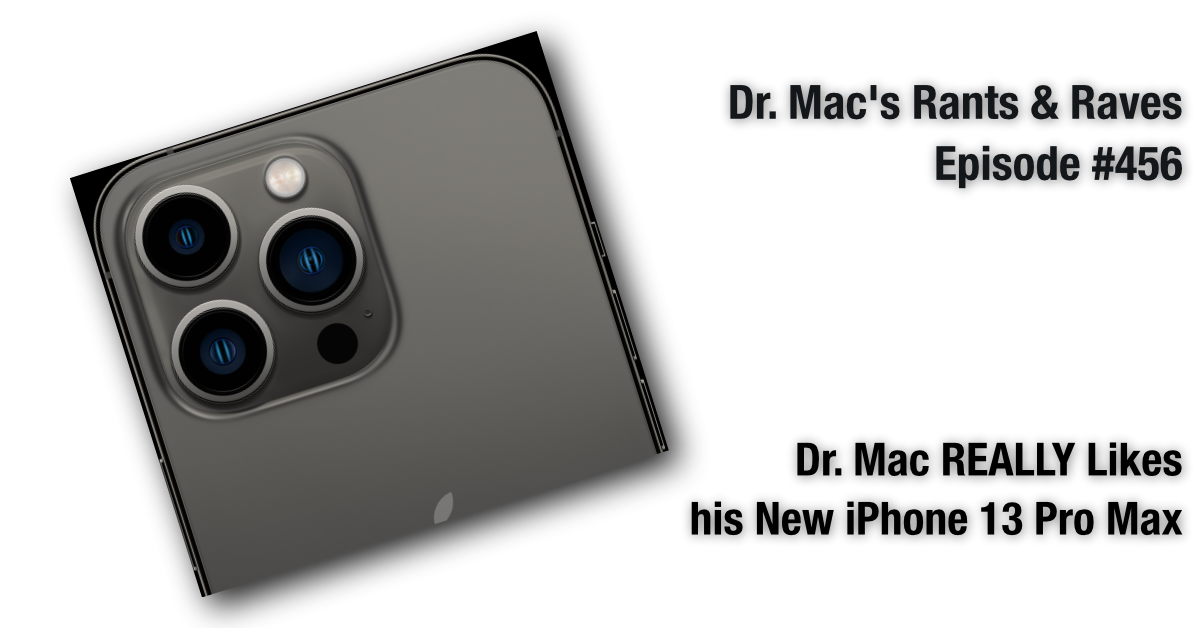 I’ve had my iPhone 13 Pro Max for nearly a month, but after using it for a few days, I knew it was easily the best iPhone I’ve ever used. It’s better in every way than my previous iPhone, a four-year-old iPhone X, but that’s no surprise. What did surprise me was how much better it was than the iPhone 12 Pro Max I borrowed while updating iPhone For Dummies last summer.

The iPhone 13 Pro Max is the best iPhone I’ve had yet for myriad reasons, but I’m going to focus on the three that matter most (at least to me): battery, screen, and camera.

And while all three are greatly improved, I was most impressed by how much longer I can go without plugging it in. My iPhone X often ran out of power before dinnertime and occasionally long before. The iPhone 12 Pro Max usually lasted until dinner, but not always. I’d usually “top off” the battery once or twice during the day.

With the iPhone 13 Pro Max, as long as I start my day with it fully charged, I don’t need to plug it in again until I’m ready for bed. What’s even more impressive is that I still have 20, 30, or even 40% left at the end of the day. I forgot to charge it overnight once or twice and could still use it for hours the next day before charging.

I’ve never had an iPhone that didn’t require topping off the battery during the day if I hoped to use it until bedtime (or even until dinnertime). I find it liberating to go all day and night without worrying about recharging.

Moving right along, the iPhone 13 Pro Max’s Super Retina XDR display is the biggest, brightest, most vivid OLED display yet on an iPhone. It’s stunning and includes ProMotion technology with adaptive refresh rates up to 120Hz, which provides faster frame rates when you need it while preserving battery life when you don’t.

Finally, the cameras are better than ever. Photos and videos are noticeably improved compared to my iPhone X and somewhat improved over the iPhone 12 Pro Max. And while I haven’t used them much, the new (Pro only) macro mode for still photos and cinematic mode for videos are clever, impressive, and fun so far. Finally, it shoots clearer, brighter pictures and videos in low-light situations.

I’d be remiss not to mention that the new camera system’s lenses protrude a bit more than on previous models. While I’ve heard others complain about the increased protrusion, it hasn’t bothered me a bit.