Some might insist that Apple’s product line has become bloated. Actually, it’s perfect.

Twenty years ago, Apple was faltering. It’s too many Mac products were poorly designed and picking the right one from a myriad of models was confusing. Steve Jobs realized, correctly, that Apple needed to focus on a few brilliant products that were compelling to the customer.

He created the now legendary 2 x 2 product matrix. Here it is. 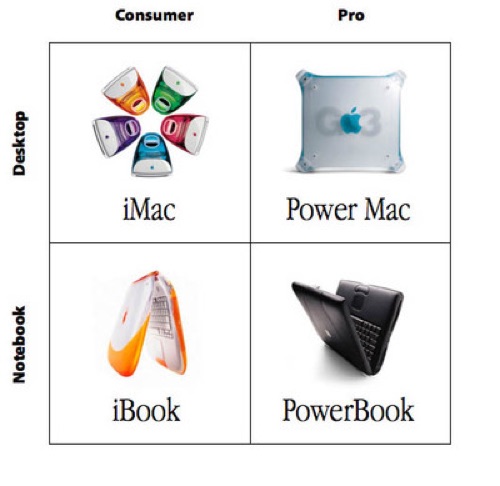 And so, the modern question is this: is Apple’s product lineup too complex?

I could go on, but that’s the gist of it.

When Steve Jobs created that basic product matrix, Apple was floundering. Just making payroll was dicey. Bankruptcy was looming. Apple has to come up with a blockbuster piece of hardware, designed by his “A” team, a new Mac, that would blow our socks off. And that’s what Apple did. In August, 1998, Apple introduced the Bondi blue iMac designed by Jonathan Ive. It was smooth, warm, easy to handle, drop-dead gorgeous. And easy to get on the internet. Back then, merely doing that was a hassle. 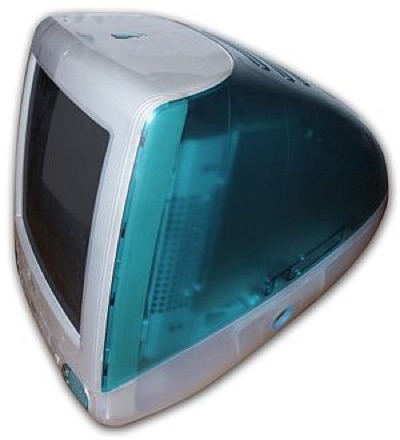 That iMac, and its brethren in the matrix, saved Apple. Engineers could focus on the Next Great Version of a few products instead of having their efforts diluted amongst many projects. And fiefdoms.

Does that apply today? I would arge that it doesn’t. Apple is roughly forty times bigger now, in revenue, than it was in 1998. It’s customer base has expanded from Macs only into iPhones, iPads, music, audio products, wearables, television and services.

The scope of Apple’s customers has changed. Apple went from being a boutique UNIX computer company to a consumer electronics powerhouse.

Sure, there are products that Tim Cook has said “No” to, following the path of Steve Jobs.

But Apple has also found out, like all consumer electronics companies, that if you leave significant gaps in the product lineup, the competition will move in hard and fast. Growth is threatened.

Apple has discovered that as it has taken the iPhone global. Price-points, colors and features don’t fit uniformly across international boundaries.

Apple discovered that when it allowed the 2013 Mac Pro to linger, dying on the vine whilst HP and Microsoft saw an opportunity to steal technical and creative professionals. And even if Apple doesn’t sell a lot of Mac Pros, that model serves as a halo Mac, a line in the sand, a statement about Apple’s willingness to compete for the hearts and minds of the pros who select their own displays.

Apple discovered that the sleek MacBook fell flat when it came to education. Its advanced, single USB-C port was just too exotic for students looking for an affordable but quality notebook that spoke to them in UNIX-speak. So long as students and educators keep buying the MacBook Air, Apple will ship it.

Apple not only looks at sales numbers, but it also looks at the varying needs of its spectrum of users. To be sure, if it can’t do something well, it’s wise to disengage. But a company of Apple’s size means that it must engage customers in as many ways as practical or risk losing them in the heat of competition. Growth is at stake.

And so, given the success of Apple, its staggering revenues, profits, and market cap, there’s a case to be made that Apple’s product line is as simple as it can be, but no simpler.

Suppose for the sake of argument that I work in STEM (science, technology, engineering or math). I want the ability to run my workload on a Unix core, while still being able to do the publication and presentation aspects of my work in polished graphical OS. In other words, I want the Mac OS, and I’d like to put it on Apple hardware, because I have had very good lifespan of the hardware I have owned over the years-which translates into a solid return on my time and my money invested in my computer system. My workload doesn’t need graphics,… Read more »

One definition for Perfect is: Free from any flaw or defect in condition or quality. My headline would read: Apple’s Product Line is Complex. And it’s Perfectly _ ; )

John: Just a quick reaction to this. Two things. First, Apple 2018 is not the Apple that SJ inherited when he returned in 1997. And, by the way, neither is the world of 2018 in which Apple have to compete the same as that of 1997. Only in hindsight, and through the retrospectoscope, can we appreciate that, however tumultuous and dire for Apple, those were simpler times in 1997. SJ’s grid should be seen in the context of Apple’s growth plan, which the company have been following ever since. Apple’s growth, and the elaboration of their platform, I have argued… Read more »

Picking the right one from a myriad of models was confusing

You need to get out more often

Ha Ha!! I live in Hollywood/LA where you’d think the place would be lousy with them – but alas – it was a fad as I see LESS every year. It clearly was NOT the game changer Apple thought it would be – but then Apple is out of touch as evidenced by chronic catch up in AR and AI, EVs, Autonomy on and on…. you have to wonder where the vision went post-Jobs. Has Apple made ANY new product that wasn’t on the board when Jobs passed? I think not. Boatloads of cash makes me wonder what the HELL… Read more »

I see a lot of people wearing them. The Apple Watch table in the stores are busy with buyers and upgraders.

I double down on my advice to get out more often. 😀

Product line is “Perfect”? Glad to see the Kool-Aid is still around. Yep- it’s perfect – I’ve been driving my Apple Car for months and my Apple EV Bicycle with iOS integrated dash display gets me all over town – the solar cell infused frame with my Apple BackPak Solar Battery rig gets me all over town without charging – and the supreme Apple AI does all the nav/steering and braking for me…in fact Apple’s AR and AI is so good that unlike Siri if you ask it when the great SF earthquake of 1906 was, it won’t steer you… Read more »

Old UNIX Guy: But the 2013 Mac Pro was used as an example, an aberration that Apple is on track to fix. I should think, for the Mac Pro, perfection is an ongoing process. ::gulp::

John, beyond the fact that no one and nothing is perfect, you’re just plain wrong to claim that Apple’s current product lineup is even close to perfect. For just one example, Apple doesn’t sell a Pro laptop (other than the possible exception of the almost 3 year old 2015 15″ MBP that they still will sell you … at full price). Now, I know that they claim that they do, but we all – you included – know that they don’t. You yourself brought up the joke that is the 2013 Mac Pro. So how is that a “perfect” lineup?… Read more »

My main gripe with Apple isn’t with hardware it’s siri. Sometimes it works great sometimes it’s awful. I think Apple let this technology wither and with all its know how and resources it’s a bit embarrassing. So pick up your game Apple you can do better. C+

I am in a rather interesting love/hate relationship with Siri. Dr Phil, wouldn’t touch it, but we are scheduled to be on the Jerry Springer Show.

Well I have never heard or read anyone complain about Apple’s Mac Product line up being complex. None. When anyone who does complain about complicated line up mostly refers to iPhone, and rightly so.

And when people do complain about the Mac, it is about their product, not the line up.