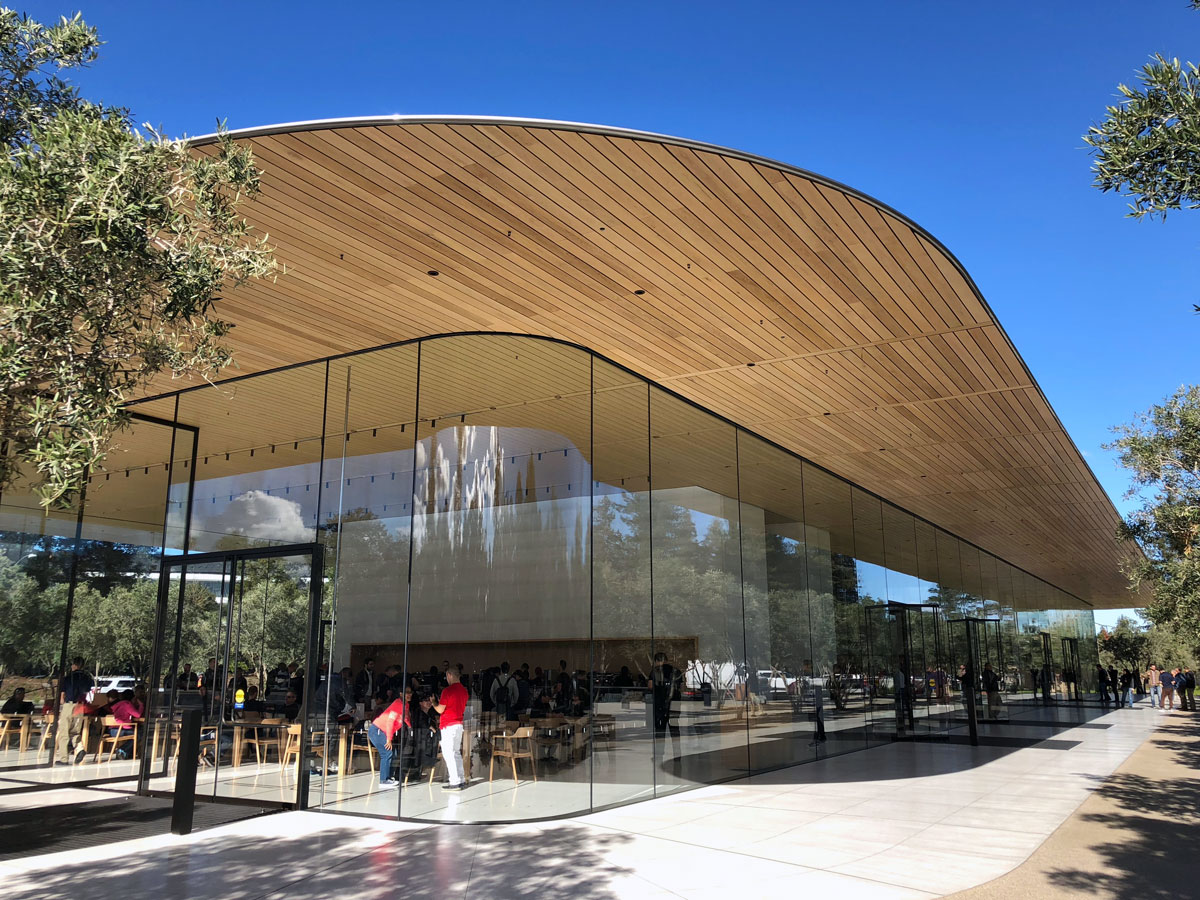 Apple Park Visitor Center opened Friday. I stopped by, took some pics, bought a shirt, and talked to folks. Here are some of those photos and my thoughts on this delightful place.

First up is the vanity tech demo to end all vanity tech demos. Apple has built an aluminum scale model of the entire Apple Park grounds, shown below. I mean, this puppy is just amazeballs. For one thing, it looks intensely cool and futuristic. There’s more, of course, because it’s made from aluminum—probably aircraft-grade aluminum because [Apple]. So it looks great and even feels great to the touch.

The company could have stopped there, but no. Apple developed an augmented reality app that turns this scale model into a living representation of Apple Park. Trees, grass, solar panels, glass walls, paths, everything’s there. Walk around the table and look through the iPad, and you’ll get intense detail for Apple’s new HQ. You can even flick up to raise the roof of the main building and see inside.

There’s no doubt that even this demonstration will feel quaint in the next few years, but as of this writing, it’s a reason to make the trek to Cupertino all by itself. It’s just that cool.

The Apple Park Visitor Center is a stroke of genius. It’s gorgeous, sure, with the look and feel of the bigger Apple Park. It has staircases like the ones at the Steve Jobs Theater and the new Apple Michigan Ave store in Chicago.

Being Apple, the staircases at the Visitor Center are different are made o a different material—quartz, specifically—than the other staircases. The important thing, however, is they’re beautiful. They even feel amazing. Seriously. I found myself running my fingertips along the stone because it just felt so good.

Another nice touch is that it has recessed bannisters—a feature Apple used elsewhere, too. Grab them while you’re going up or down, and you’ll feel how they invisibly curve around to make a perfect handle for you to hang on. The stairs are everything they need to be in ways most people will never notice. Again, because [Apple].

The Visitor Center also has a roof from the same school as that Chicago store. The floor of the observation deck atop the Visitor Center is made from Brazilian teak. That’s the sort of exotic and specific touch you know happened because a team of designers spending untold hours poring endlessly over samples before deciding on exactly what to source.

The Visitor Center also has Apple’s first publicly-accessible cafe, a ginormous video screen, a huge floor plan, and the most amazing augmented reality demonstration the world has yet seen, as described above. But none of these things is why I think it’s a stroke of genius.

What makes this building so clever is how Apple created a place for Apple fans to go (and shop). A place where they can see Apple Park, but aren’t going to be in the way. Apple Park is close, but it’s across N. Tantua Ave. Separating Apple’s destination architecture from the unwashed masses, are the road, a berm, and not one, but two screens of trees.

Here’s a pic taken from the observation deck. The angle in the roof for the floor below is because I had to take a pano to get all of Apple Park in one pic.

Contrast that with Apple Infinite Loop, where we, the unwashed masses, can park all willy-nilly and get in the way of all those busy Apple employees. Apple solved that at Apple Park with the Visitor Center.

I am looking forward to seeing the place.

Those cube shaped stools are also used in the recently reopened, at a new spot in the shopping center, University Town Center Apple,Store. This is a much larger store than the original one at UTC.