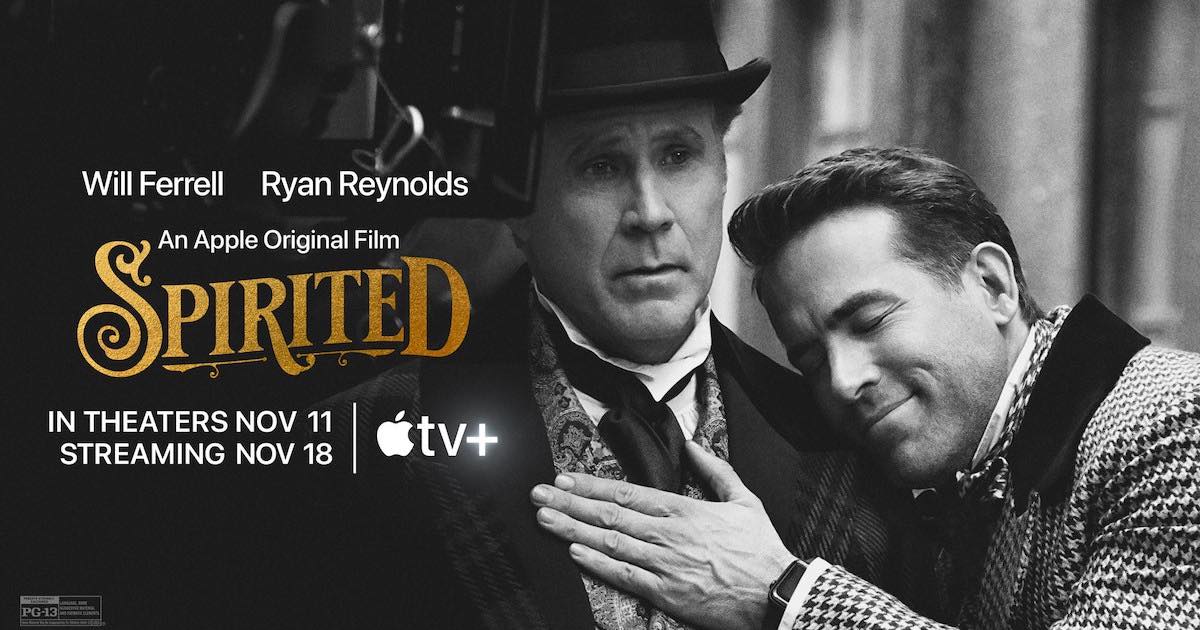 Despite Halloween being several weeks away, Apple TV+ nonetheless is looking to get audiences in the Christmas mood by unveiling a teaser trailer for the new original film Spirited.

The new film, starring Will Ferrell, Ryan Reynolds and Octavia Spencer is a musical reimagining of the classic Dickens’ novella A Christmas Carol.

Apple is giving audiences a sneak peak with a new teaser for the film Spirited. Opening with some cutaways that say “It’s beginning to sound like Christmas”, gold-and-black silhouettes of Ferrel and Reynolds dancing interject between the message. The two dancing in this style is heavily reminiscent of Apple’s old iPod ads, which Harry Styles also recently paid homage to while advertising Spatial Audio.

While the one minute and 32 second trailer doesn’t reveal too many facts, the trailer does a great job of providing plenty of jokes in the short amount of time. Users will have to watch the trailer to catch them all, but so far, the film looks to show serious promise as a holiday classic.

Of course, Ferrell is rather famous for his starring role in the film Elf, which, I believe, has entered the canon of “must watch Christmas movies” (though, personally I prefer Home Alone). Interestingly, this is Reynolds’ first Christmas movie, so it will be interesting to see how he fairs. While Spencer has likely not been in a Christmas movie, she did make an appearance in Rob Zombie’s Halloween 2.

For this holiday season, Apple TV+ looks to be delivering plenty of holiday cheer. Along with unveiling the teaser for Spirited, Apple TV+ has also announced several new holiday specials within its kids and families lineup. This includes a new short film, The Boy, the Mole, the Fox and the Horse featuring Jony Ive as executive producer.

Apple TV+ has also announced that it will be airing the Charlie Brown holiday specials during select times throughout the holiday season. This includes, It’s the Great Pumpkin, Charlie Brown, A Charlie Brown Thanksgiving and A Charlie Brown Christmas. Audiences will not need an Apple TV+ subscription to watch these specials.

What are you looking forward to on Apple TV+ this holiday season? Let us know in the comments.