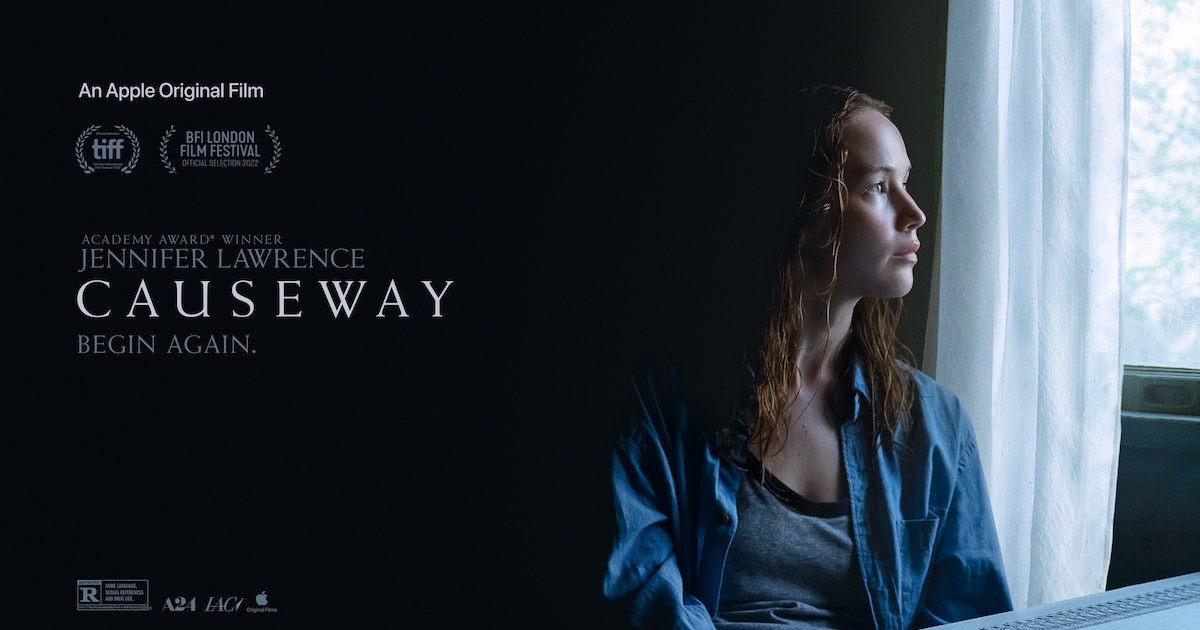 Today Apple Original Films and A24 have unveiled the trailer for the new drama Causeway, starring and produced by Academy Award-winner Jennifer Lawrence.

Causeway will premiere in select theaters and globally on Apple TV+ Nov. 4, 2022.

Apple Original Films and A24 have unveiled the trailer for the new drama starring and produced by Lawrence, Causeway. The new drama provides an intimate portrait of a soldier, named Lynsey, as she struggles to adjust to her new life after returning to her home in New Orleans. Within the film, Lynsey is a military engineer who suffers a debilitating brain injury after an IED explosion in Afghanistan.

Staying with her mother (Linda Emond), with whom she shares a tense relationship, all Lynsey wants to do is return to her work as an engineer. Her doctor (Stephen McKinley Henderson) is wary, and so in the meantime, she gets a job cleaning pools. When her truck breaks down she meets James Aucoin (Brian Tyree Henry), who works at the auto repair shop and offers her a ride home. Slowly they start to rely on each other for company and solace. James, it turns out, is also suppressing his own past trauma.

These two damaged souls’ budding friendship forms the center and the heart of Neugebauer’s debut feature — a quiet but devastating, and ultimately uplifting, story about coming to terms and moving forward.

Considering how well Apple did at the this year’s Oscars, no doubt the company is searching for more gold next year. With Causeway arriving during primetime Oscar season, Will Smith’s Emancipation will no doubt find itself earning nominations (Though Smith may have some issues).

Furthermore, with Apple being no stranger to winning awards, the new, currently unnamed project from Vince Gilligan is sure to bring the streaming service even more nominations and awards.