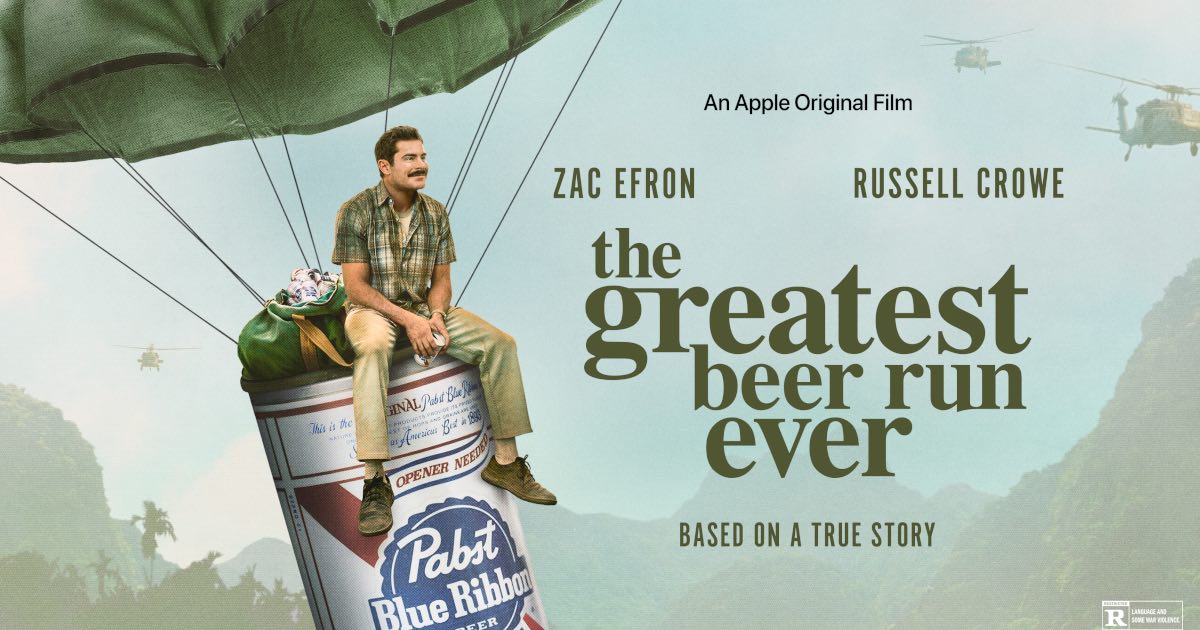 Apple TV+ has officially unveiled the trailer for The Greatest Beer Run Ever, starring Zac Efron and directed by Peter Farrelly. The film will make its global debut in theaters and on Apple TV+ Sept. 30.

The Greatest Beer Run Ever follows the true story of John “Chickie” Donohue (Efron). Set in 1967, Donohue leaves New York in order to track down his army friends serving in Vietnam, with the aim being to share a few beers in an effort to show that they have the support of the American people. Despite having optimistic goals, Donohue quickly realizes he’s in over his head as he confronts the horrors of war.

During his time, Donohue hitches a ride aboard a Merchant Marine ship, carries beer with him through the jungles of Vietnam, and gets mistaken for a CIA officer due to his civilian appearance.

The film is based on The New York Times bestselling novel The Greatest Beer Run Ever: A Memoir of Friendship, Loyalty and War by Donohue and J.T. Molloy. In addition to directing, Farrelly also co-wrote the script alongside Brian Currie and Pete Jones.

Additionally, alongside Efron, Crowe and Murray, The Greatest Beer Run Ever also stars Jake Picking, Will Rope, Archie Renaux, Kyle Allen and Ruby Ashbourne Surkis. The film arrives from Skydance media and is a production by David Ellison, Dana Goldberg and Don Granger along with Andrew Muscato and Jake Myers.

The Greatest Beer Run Ever is going to debut in theaters Sept. 30 following the world premiere at the Toronto International Film Festival. The film will also begin streaming on Apple TV+ on the same day.

With Peter Farrelly being responsible for some of the most classic comedies of the nineties (Dumb and Dumber, Kingpin and There’s Something About Mary), he’s also responsible for some of the worst at the turn of the century (Shallow Hal, Stuck on You, Movie 43). Interestingly, critics consider Movie 43 to be one of the worst movies of all time. Additionally, how Movie 43 came to be made makes for an interesting read.

Of course, 2018’s Green Book saw Farrelly doing an about face, with the film seeing several award nominations and wins. As Farrelly seems to have performed a complete 180 in terms of movie quality, it seems like The Greatest Beer Run Ever shows a lot of promise.

There’s a lot arriving to Apple TV+. Along with The Greatest Beer Run Ever, Apple TV+ is also getting a new action comedy starring Mark Wahlberg called The Family Plan. Furthermore, Apple TV+ is also looking to produce a two-part documentary on the life and times of comedian Steve Martin.

Are you looking forward to The Greatest Beer Run Ever? What are you watching on Apple TV+ right now? Let us know in the comments.