When Apple Music debuted on June 30, 2015, the tech giant made it clear the service wouldn’t be limited to just Cupertino’s devices. From the start, the service was available on Macs, iPhone and iPad devices. Even Windows-based PCs running iTunes 12.2 or later were supported. Cupertino announced the service would come to Google’s Android devices in the fall of 2015. Three years later, let’s see how well the support has matured and whether the Android Apple Music experience matches how friendly the service is on Apple devices.

Getting Into Apple Music on Android

Unlike with your iPhone or iPad, you won’t find Apple Music ready and waiting for you on your Android device. Instead, you have to download and install the Android app from the Google Play Store.

You can download Apple Music straight from the Google Play Store

Once installed, you can sign in with your existing Apple ID or create a new one, right from the app. You can even get the same three-month free trial that Apple users enjoy when they first sign up. The Apple Music app on Android looks and feels just like the sign-up experience on iOS or macOS. When you first subscribe, the app guides you to choose genres and artists you really like and dislike.

Even beyond he subscription process, the Apple Music on Android experience is almost exactly like you’d expect if you’ve used it on iOS. The various screens are nearly identical to those on iOS, from browsing your Library to exploring the For You and Radio tabs. Even searching for new music to download and explore is as smooth and seamless as on your iPhone or iPad.

If you’re already familiar with Apple Music on iOS, the Android experience looks the same

Have you ever wanted to find a song, but didn’t know anything more than a the chorus or a few words from the lyrics? With Apple Music, you can now search for songs by entering a few words of the lyrics. The service will quickly scan through the lyrics available from Apple’s humongous music library, and give you songs, albums, and artists that might match that song you’ve got stuck in your head. 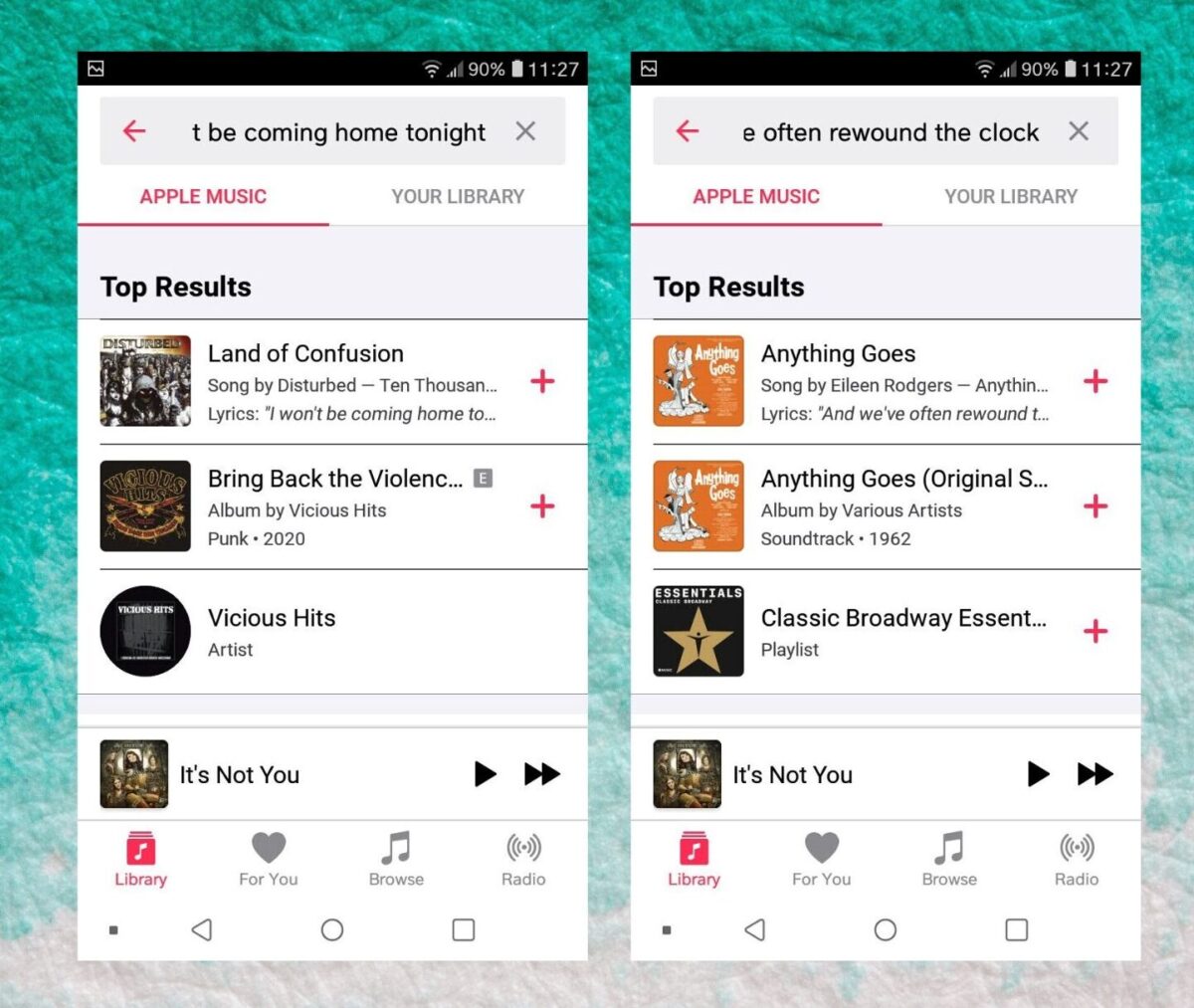 Within Apple Music on Android, you can search by lyrics if you cant remember song titles

Browsing and Adding Music to Your Device

You can also, of course, search by the artist or song name, or just browse your favorite genres. Apple Music’s For You tab will give you suggestions based on your listening history. The more you listen, the better those recommendations get. It also helps if you Like or Dislike songs as you listen, using the Heart icons the app provides you when you tap the three dots on the right side of the Now Playing screen. 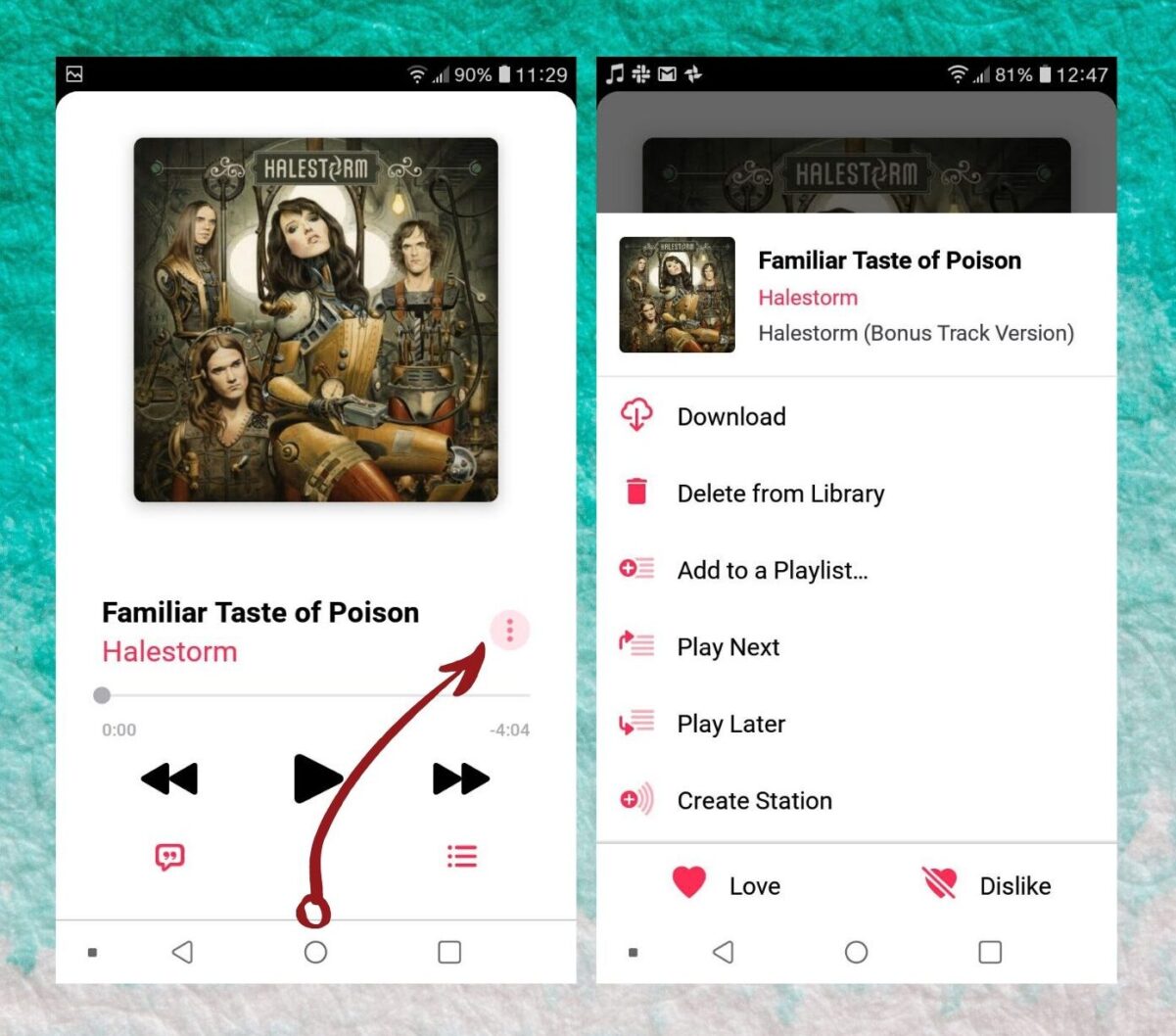 You can Love or Dislike songs as you listen

As you add artists, albums, and songs to your Library, Apple Music gives you the chance to download your favorites to your device. You can also choose, from Settings, whether or not your device uses cellular data for streaming and downloading content. You can choose whether to store your downloaded music in internal memory or to your SD card. This is an option iOS users lack, since iOS devices don’t have SD card slots.

There really is a lot to love about Apple Music on Android. The whole experience is enjoyable, from subscribing to getting the most out of the app. You can easily find music from Apple’s immense library, create your own playlists, and even generate radio stations based on your favorite tunes, artists, and genres.

The app provides you with curated information about each artist and album, helping you learn more about the music you love. The controls in the app all function just like the service’s iOS counterpart. So, if you’ve switched from iOS to Android, you don’t have to learn a completely new interface.

As you’re listening, you can follow along with the lyrics.

Apple Music even provides a feature or two that you won’t find in Google’s offering. Unlike Google Play Music, Apple allows you to view the lyrics to most of your songs as you listen. The lyrics move along as the song plays, showing you the words as they’re sung (or screamed.)

Is the Apple Music Experience Perfect Outside iOS?

No, but then again, I’d argue that it’s not perfect on iOS, either. We’ve said in the past that Apple Music execution has been nearly flawless, and I still agree with that, but there are always hiccups. In the case of the Android app for the service, there is one minor flaw that sometimes gets quite aggravating.

Even with its idiosyncrasy, I still prefer Apple Music over its Android competitors. The app is better organized and the curation of music and recommendations is more in line with my musical preferences. I’ve already cancelled my Google Play Music subscription, but Apple Music is here with me to stay.

Also be sure to check out the availability of Apple Music on newer Samsung Smart TVs.

Functions just like Apple Music on iOS in most regards

You can search for music by song lyrics

Huge collection of music to listen to

Playback stops if you dismiss all notifications

Wow great write up Jeff. I didn’t even realize this was out on Android.