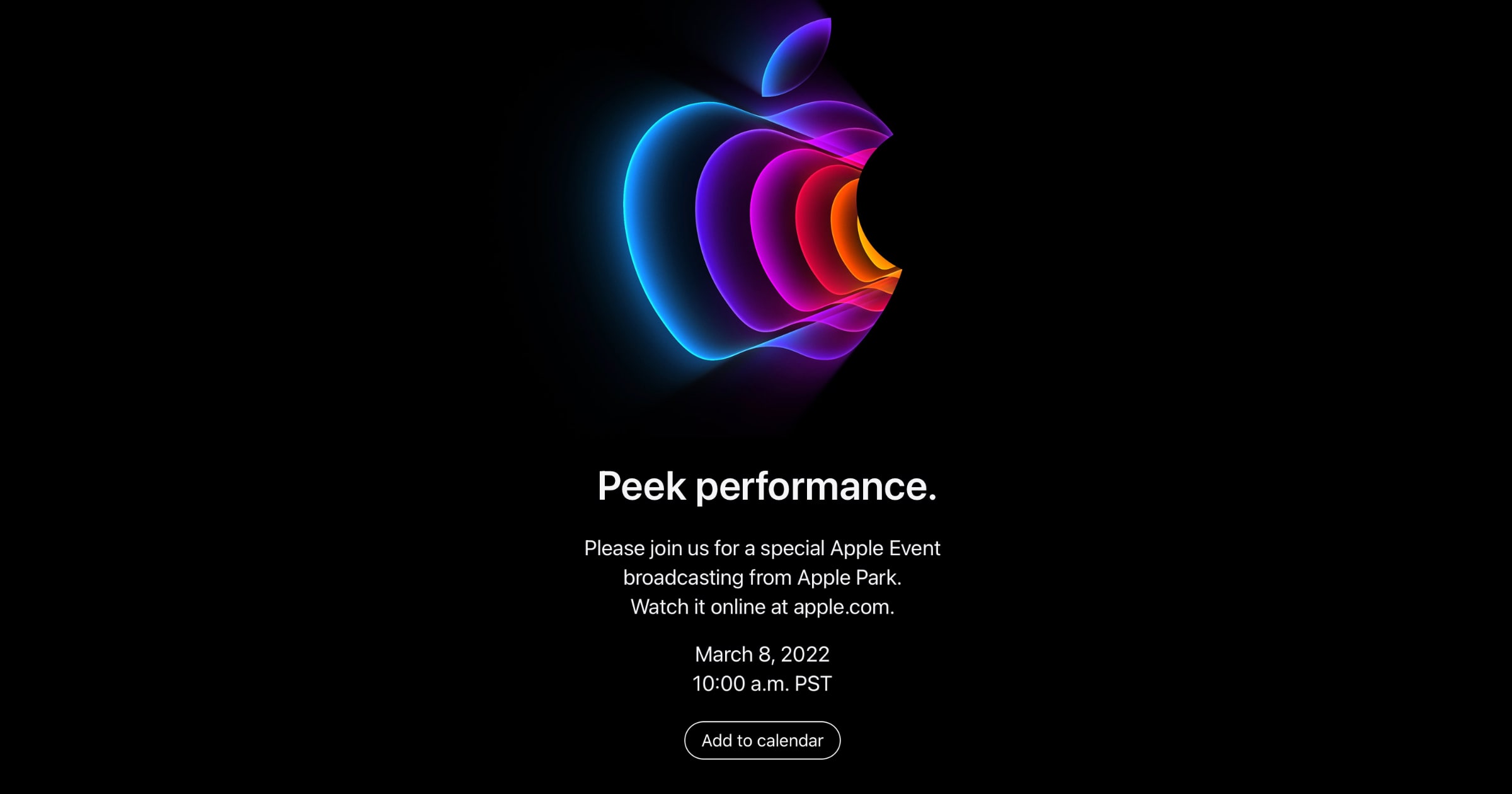 “Peek Performance,” Apple’s first event for 2022 is Tuesday, March 8. The event is expected to bring several new or upgraded products, including a 5G-capable iPhone SE. The Cupertino-based company could have even more in store for us, so here’s what to expect at Apple’s “Peek Performance” event.

Perhaps the biggest announcement at the spring event in 2022 will be a refreshed iPhone SE. Apple last updated the budget-friendly handset in 2020, featuring the same design as the iPhone 8, including a Touch ID button but the internals of the iPhone 11.

For 2022, expect to see the iPhone SE maintain the same design aesthetic, even keeping the Touch ID button. We aren’t really expecting Cupertino to offer a redesign of the handset until 2023 or 2024.

However, the inside of the smartphone will be brand new. Rumors and leaks suggest the new iPhone SE will feature the A15 Bionic chip found in the iPhone 13. It should include a 5G modem, bringing the faster data speeds to iPhone users at a friendlier price point.

Noted analyst Ming-Chi Kuo recently began tweeting, starting us off with a prediction that the device will be available in white, black, and red. Apple will offer the device with storage options beginning at 64GB, with a new 256GB option

Rumors also point to a new iPad Air 5, taking its design from 2021’s iPad mini 6. The new tablet should include the A15 processor, a 5G cellular modem, and a four-speaker setup instead of the current dual-speaker configuration.

We also think Cupertino may update the camera system for the tablet. It’s probably we’ll finally get 1080p video recording in 25fps and 30fps, as well as Center Stage support. Speculation suggests the new iPad Air will have similar camera lenses to the iPhone 13, including wide- and ultra-wide-angle camera lenses. Just don’t expect a LiDAR scanner, as Apple will probably reserve that for the iPad Pro.

We may also find out about new Macs at “Peek Performance,” featuring Apple Silicon processors. A few weeks ago, Cupertino disclosed three new Mac computers in an Eurasian regulatory database, including one laptop.

Finally, Apple may give us a new 27-inch iMac, transitioning to Apple Silicon. Many reports suggest it will feature miniLED display with ProMotion technology, using the M1 Pro and M1 Max chips.

The word “Peek” in the event title, along with the colors of the Apple logo, may hint at color options for the new iMac.

Or, the reference may suggest the new Apple Studio display hinted at last week. Bloomberg’s Mark Gurman suggested Apple finished development of the 7K-resolution display several months ago and is ready to announce it.

What We Probably Won’t Get (Yet) at ‘Peek Performance’

Cupertino’s working on a number of other products for 2022, but the “Peek Performance” event is probably too early in the year to see them. For example, the Apple Watch 8 and iPhone 14 almost certainly won’t appear until the fall. The new iPad Pro also hasn’t been discussed much, so that’s probably coming in a summer or fall event.

Some of the Macs in the pipeline could be held until later in the year, too. In fact, Ming-Chi Kuo believes the new Apple Silicon-powered Mac Pro and new iMac Pro to be on hold until 2023.

Finally, we also know Cupertino is working on a mixed-reality headset. Despite numerous mentions of the software name, realityOS, in recent iOS betas, we don’t expect any official news on that product until WWDC in June, at the earliest.