When Apple introduced the second-generation TouchID sensor in the iPhone 6s, users were quick to notice how much faster it was at recognizing fingerprints than its predecessor. This meant that users could unlock their iPhones and access their data faster than ever, but it introduced an interesting new problem: TouchID worked so quickly that users didn’t have an opportunity to see their pending notifications before being dropped at the home screen. Even a casual graze of thumb or finger over the home button could trigger the iPhone to unlock.

To address this issue, Apple has changed how iOS devices are unlocked in iOS 10. Gone is the famous “slide to unlock” and in comes the new “raise to wake,” which coordinates with TouchID. While you can still press the home or lock buttons to wake your device, the iPhone will now “wake” to the lock screen when you raise it.

From here, resting your thumb or finger on the home button unlocks the device but does not open it, instead leaving the user at the lock screen. This gives the user the opportunity to review any notifications. To access the home screen, or open the last running app, the user must press the home button.

This new unlock/open system is a welcomed change for many, but some users may prefer the previous method of unlocking and opening the device immediately after using TouchID. Thankfully, Apple allows users to switch back to the old method via an option in the iOS Settings. Here’s how to find it.

From your TouchID-enabled iPhone or iPad, head to Settings > General > Accessibility > Home Button. There, find the option labeled Rest Finger to Open. 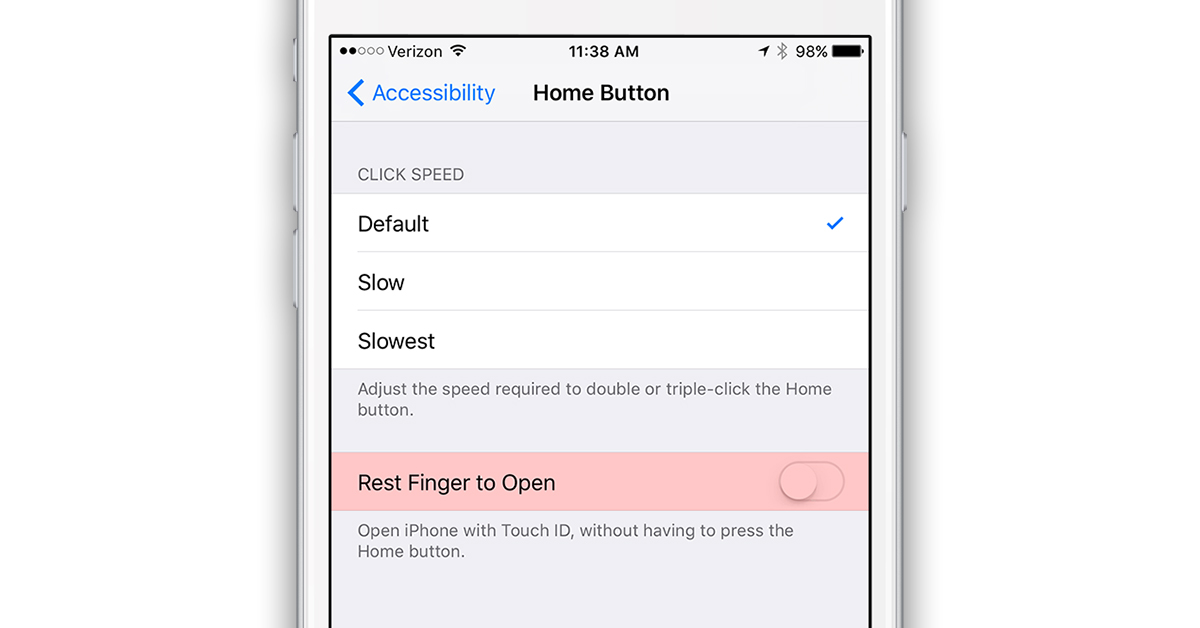 With Rest Finger to Open disabled (the default configuration in iOS 10), touching the home button with your finger will unlock your device but leave you at your lock screen. Enabling the option will automatically unlock and open the device when your finger touches the home button, taking you to the home screen or your last open app and effectively reverting the way that TouchID functions to pre-iOS 10.

I think there should be an option to enable “ask passcode to turn off”. That way if your iphone is stolen the thief cannot turn it off to avoid tracing, calls or whatever. I don’t know how they didn’t thought about it yet.

Back on topic, I find the “press to open” really annoying. If I want to read notifications first, I would just not rest my finger on the fingerprint reader, right? And it is confusing because sometimes it opens on touch, sometimes it asks for pressing. Good to know I can turn it off.

I think that I like the new Raise to Wake feature, but miss the Auto-lock setting in iOS 9 that allowed adjusting the time before the screen locked. I’m not sure why Apple removed it.

Thanks Jim, and thanks for the Mail tip wab95

iPhone 5 runs faster than my iPhone 6 Plus….

It’s taken a bit of getting used to but I’m starting to really like iOS10. The little things like raise to wake have improved how efficiantly I work with my SE. I already modified my lock screen so mail and Messages show up along with a calculator. All morning I just feel the buzz, pull the phone, check the screen and put it away. Need to figure something, pull it out, done. I’ve unlocked the phone less than half as often as I usually do. Much smoother.

On an iPad that doesn’t have Touch ID the SmartCover no longer unlocks it (bring you to the Passcode Keypad if enabled). Kinda kills the Smart in the SmartCover.

Thanks, Jim. I noticed this immediately after downloading iOS 10, and after confirming this was what was happening unearthed the former setting in preferences. I was actually going to comment on this on any iOS relevant post here on TMO. This was not the only setting that changed. At least on my 6s Plus, the Mail setting changed to putting the latest entry in a discussion thread at the bottom, instead of at the top, causing me some momentary confusion. Again, one can re-select ‘Most Recent Message on Top’ in Preferences under Mail. I had to do the same for… Read more »