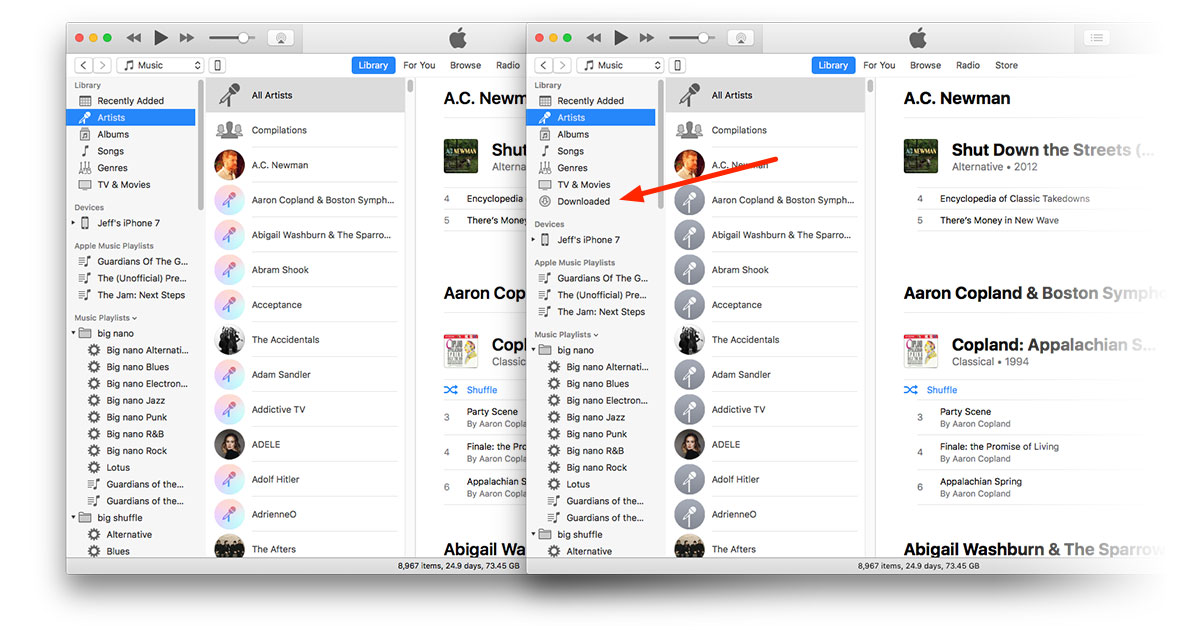 Apple rolled out iTunes 12.7 on Tuesday with support for iOS 11—the new version of the iPhone, iPad, and iPod touch operating system that will be publicly available on September 19th. The update also makes some interface changes and does away with saving backups of the apps installed on your devices.

The iTunes update moves Internet Radio to the Music sidebar, moves iTunes U content to the Podcasts section, and removes Ringtones. The Windows version removes the Books section, too.

Cutting app backups and ringtone support from iTunes may be a pain for some users, but it wasn’t an arbitrary decision. Apple now expects users to redownload purchased apps through the App Store and use iOS 11’s settings to reinstall ringtones, which presumes the apps and ringtones you want are still available on the App Store.

iTunes 12.7 is a free download. You can update to the new version from the Updates tab in the App Store app on your Mac.

Since the iTunes 4.0 to 4.1 “update” fiasco, I have learned to be veeeerryy cautious about upgrading iTunes at Apple’s request.

This is a monumentally bad update. I have over 900 apps, and if I have to update and manage them on the iPhone rather than on the computer, it is a colossal burden, adding many hours of tedium. I will not be upgrading to this version.

iMazing’s response to my inquiry:

Thank you for contacting us.

iMazing 2.4 should be fully compatible with new iPhones and iOS 11.

Please let us know if you have any other questions.

So this looks like the way to go for those of us who want to setup their new iPhone using a Mac.

I have iMazing on my MacBook Pro and although I don’t use it a lot, it may be the answer we’re looking for. I have submitted an inquiry to their support department requesting info on how the introduction of 12.7 affects the operation of their app.

So when they say it doesn’t backup Apps any longer, do they mean the actual apps themselves or apps and app data?

If it doesn’t backup the app data, this is a major problem for me.

Oops! The newly redesigned App Store in iOS 11 doesn’t have a way to unhide iOS apps. So this version of iTunes also removes the ability to recall an app. If you paid for an app and for hid it temporarily – no way to get it back. Pay for it again!

Fortunately, they left the file sharing capability in there, so you can still transfer files to apps that support it. It’s actually a little easier to use the file transfer now that it’s not at the bottom of the list of all apps on the phone. Of course, this breaks companies that have web links to iOS app downloads on their websites (unless you’re on an iOS device, of course). The links to the iTunes preview website doesn’t have the open in iTunes button any longer. It’s a shame, I actually preferred browsing for apps on the bigger Mac screen.… Read more »

Argh! Just realised what a mess iOS updates will be in my house. Because we have 8 iOS devices — 4 iPad and 4 iPhones — I download the update ONCE to iTunes and each person in the house does the backup, update, restore from that download. So if the Apple servers are jammed we only need to wait ONCE> Now 8 devices will be pinging Apple’s iCloud backip servers and update servers. Each one will have to go through the slow WAITING dance.

How is this progress?

I have exactly the same issue. Compounded by the UK’s dreadfully slow “broadband” and our poor links to Apple in the US. It can take hours for just a couple of App updates (usually Microsoft one I must say). Download once to iTunes is just about doable. Multiple times to make sure all the devices are done separately – forget it. What a backward step!!

Cutting app backups and ringtone support from iTunes may be a pain for some users, but it wasn’t an arbitrary decision. Apple now expects users to redownload purchased apps through the App Store and use iOS 11’s settings to reinstall ringtones, which presumes the apps and ringtones you want are still available on the App Store.

Yes. All iCloud backups are encrypted.

$10/month because sometimes users want to go out without the iPhone?

Stupid, I never download apps direct on iPhone, I guess I won’t being updating to iOS 11 as I’m sure iTunes 12.7 is required.

There should be an iPhone app for managing the phone and syncing.

Exactly. An iPhone App, a Music App, A Videos App, etc. You know, like on iOS.

It is obese bloatware, but a reasonable alternative for accomplishing still-necessary tasks would be nice. Apparently ringtones can still be synced if one has the files, but for people with limited bandwidth, backing up and restoring the phone could really be a pain the booty:

I feel it’s a bit of a dichotomy. The iPhone is still touted as a revolutionary piece of technology but more and more it resembles an inert appliance. So which is it, Apple?

iTunes is obese bloatware. I support anything they can do to shrink the app.

Put Jonny Ive in charge of it, it would be thin enough to use for shaving.

I only use it for backups and app downloads. Removing all of the music and video stuff would be fine with me.

Don’t panic; there is still a Tones section when you look at your iPhone, and you can still drag&drop ringtones from the Finder into this to have them sync. You just can’t see them in your iTunes library any more (which means they’re just floating loose in the iTunes Media folder – odd).

This is so annoying. I don’t get what that Downloaded thing is in the sidebar also, just shows all my media. I can’t even see my apps on my phone when I connect it to my Mac now. I was hoping they would move Apple TV apps to iTunes since I find it so hard to search for them on the Apple TV but now its all gone from iTunes. Its nice to have one less thing cluttering up iTunes now, but feels odd. I guess I will just have to learn to manage apps only on my phone now.… Read more »

Sigh. Every single one of my ringtones is a custom one, and after my nine years of using iPhones, that’s a lot. Apple continues their trend of disempowering their users. iOS 11 looks great, but so much of the rest of what they are doing is focused on consumption, not creation (no, sticking my face on emoji or making AR selfies do not count). I understand that business is business, but I am very disappointed. I am beginning to wish in earnest that there were an alternative. Their respect for privacy is all they have left to keep me fully… Read more »

I have confirmed in 12.7 you can still sync custom ringtones manually. Only the store for purchased ringtones was removed.

Manual sync of custom .m4r files is still done the way it was before.

They should have deleted Eddie Cue

How will the 12.7 change the way I setup a new iPhone? Prior to 12.7 I would backup my old iPhone in iTunes on my MacBook Pro and restore to the new iPhone. Will this still work or am I now forced to use my iPhone’s iCloud backup to restore…a much slower process to be sure?

You can still backup the phone but I’m not sure that apps are backed up anymore, which if that is correct, I agree that this is a huge issue because it requires using a connection to redownload the apps, and I don’t know if it backs up the “set” of apps you had and redownloads them or if you have to get them all back manually. As time goes along, I’m sure someone will test this so we can find out for sure.