The biggest known change is support for the new 2018 MacBook Pro models that shipped last week.

macOS Mojave has a new feature that brings it into parity with iOS. You can control ad tracking and reset the Mac advertising identifier.

The Apple photo printing service has been discontinued. Previously this was a service in the Photos app on macOS.

UI-UX designer Kévin Eugène created a macOS desktop concept experience. He calls it macOS Newton, but he doesn’t redesign apps, just the overall experience of the desktop. Like, not using windows for apps, but instead something called Flows. It opens apps into fullscreen mode like on iOS. Multiple apps can be summoned from a Flow Strip, a bar on top of the dock. Flows, like Shortcuts, are programmable. You can open up a Flow of multiple apps in a certain order with a click. All-in-all I think the concept is interesting, although I can’t see Apple ever wildly changing macOS like this.

Apple released a minor update for macOS Mojave 10.14 Developer Beta 3. The most obvious change is the build number, going from 18A32g to 18A32h.

Apple designed Mojave’s Dark Mode to have dynamic grays. But what if you want true black on macOS Mojave?

We’ve got another keyboard shortcut for you, and it lets you quickly enter fullscreen mode. Apps will take advantage of your Mac’s display. 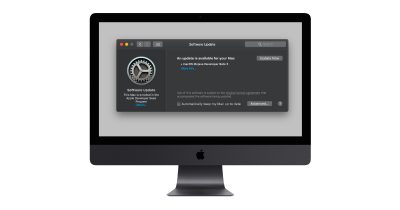 In macOS High Sierra and earlier operating system updates show up in the Updates tab in the App Store, but not so in macOS Mojave.

When formatting an external device in preparation for macOS High Sierra (or the public beta of Mojave), an odd display bug can appear. John explains.

Apple is deprecating OpenGL and OpenCL in macOS Mojave. That makes Mac game developers nervous for the future of Mac gaming.

With macOS Mojave now in developer beta, many will want to try it out as soon as the public beta is released. There are some ways to do this with care and caution and still have fun.